Is “Natural Selection” in Jeopardy? 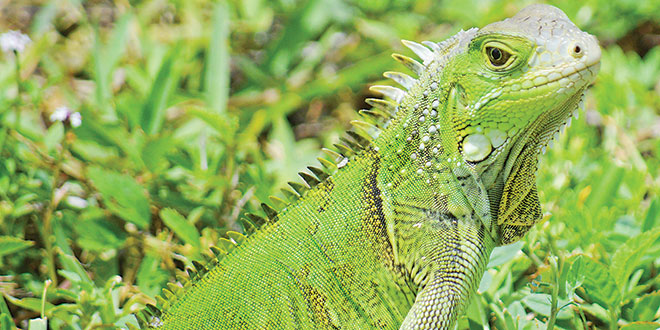 The green iguana is a reptile, but closely related to amphibians. As a species, amphibians aredisappearing from the face of the Earth at an alarming rate. Could this one be next? Photo by Bob McConville

Since the earliest times of life on Earth, animals, plants and minerals have been changing. Even today, as our planet makes “adjustments,” everything here must do the same. Days are longer in the summer and shorter in the winter, the rotation of the Earth is slowing, factors such as El Nino and La Nina will affect weather patterns, and waters levels are rising, again.

Some creatures will easily survive and adapt to these changes, while others will not. The ones that do continue to flourish depend on their abilities to migrate, mutate and make changes in their habits. The ones that don’t…well, it was nice knowing you.

Those life forms that survive environmental pressures, the competition for food or mates, are good predators and are able to adjust as the climate changes. They are here by what is known as Natural Selection. Performing the above-mentioned tasks will ensure these favorable traits in future generations.

Very simply put, only those organisms best adapted to their environment tend to survive and transmit their genetic characteristics to the next generation, while those less so will tend to be eliminated.

Some animals in our area seem to be perfect machines in their habitats and have not changed at all. Some shark species are supposedly still the same as they were millions of years ago. Alligators have virtually remained the same, as well as many other species that live in the water.

That last phrase, “that live in the water,” is key. Humans have altered the face of the Earth more than any other species, and the pace of change is increasing based on the sheer number of people here. Some species such as elephants, beavers and ants can remake the environments to suit their purposes, but no species has been as global about this as man.

On land more than 80% of the Earth’s surface has seen human activity. Terrestrial changes go back more than 10,000 years when agriculture began. We learned to cultivate the ground and plant seeds to provide food. The continued population growth and the development of transportation and trade allowed us to control more land and this, unfortunately, caused grave consequences for both the species in our path and their habitat.

What should have been “Survival of the Fittest,” Natural Selection, went out the window. It now became a matter of some species remaining in existence at all.

We are currently experiencing the worst extinction rate of some species since the dinosaurs disappeared 65 million years ago. Extinction is a natural phenomenon and has, in the past, occurred at a rate of about five species per year. Today’s rate is nearly 5,000 times the previous numbers, meaning we are losing more than 10 species per day instead of the natural one to five species per year.

Amphibians, birds, fish, invertebrates, mammals, reptiles and plants are all in danger in record numbers. Here in the United States more than 30 percent of 800 bird species are of conservation concern. Worldwide 12% of nearly 10,000 known bird species are on the threatened list. This is just the birds!

So is Natural Selection at risk on our planet? If there is no strongest of a species to thrive, then there is no weakest of that species either. Very simply, there is no species at all!

Can we, as humans, reverse this problem? I’ll let you answer that question. Some scientists predict that 30-50% of all species on Earth will be gone by mid-century. Is this true? Only time will tell. What do you think?

Bob is the owner of Stepping Stone Ecotours and a naturalist on board a dolphin survey boat. He is a member of Florida SEE (Society for Ethical Ecotourism). Bob loves his wife very much!