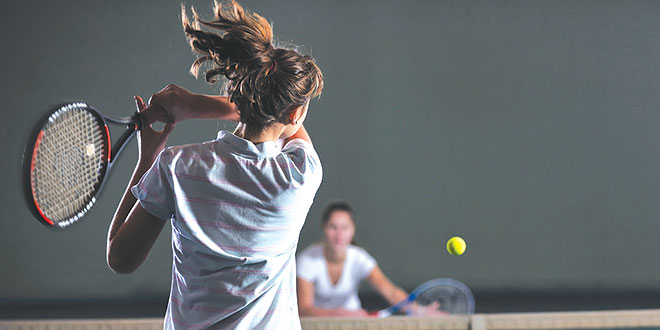 Ever since my directing stint at the prestigious Hall of Fame in Newport, Rhode Island, I’ve been on-court coaching a huge variety of students, and it has fueled my creativity to write more tennis articles.

It is easy to have fresh ideas when one is so involved in the game of tennis, and most players make the same mistakes no matter where they hail from or whether they are young or old. The problem for so many tennis players is they fail to truly understand their limitations; mistakes are inevitable, but the count will undoubtedly rise if they don’t make modifications.

Author Malcolm Gladwell highlights the idea that in order to consider yourself an expert in your field you must log at least 10,000 hours of practice in his book “Outliers.” Unless the tennis player is an incredible athlete and is able to put in countless hours of practice, he must take a more realistic approach. However, too many youngsters try to defy the odds, and then stubbornly approach their shots with too much power.

One of my favorite examples of this poor shot-making is when the player is returning serve in the ad court and the serve jams the returner, still trying to hit the ball with the inside-in pattern (smart approach: crosscourt return). After our junior match last week, I asked a 13-year-old player why he attempted such a low percentage shot and he looked at me as clueless as one could be. Clearly, he did not have any type of plan and was just shooting from the hip.

Without a doubt, I am biased; most young players need extensive coaching so they are better equipped to hit the correct shots under pressure. With so many inexperienced tennis players always attempting the most difficult strokes, they neglect to learn about how to truly execute a point. Case in point: If the typical teenager constantly hits the ball too hard and cannot have a legitimate rally, he is unable to learn the nuisances of the sport.

Whether I am viewing the Wimbledon finals or a big local finals event, certain points last at least six or seven shots. Both Roger Federer and Novak Djokovic temper many of their strokes as they need to feel out their opponent. When Novak and Roger are embroiled in a longer point, each player judiciously waits for their big moment, and they pull the trigger. Conversely, unproven recreational players are too impatient, and they ‘go for broke’ too early and too often.

Believe me, wise opponents are fully aware of what is happening on-court. If they sense immature shot selection, they will alter their games and make sure to keep the ball in play at any price. Perhaps the real problem on the tennis court is a microcosm of our current way of life; far too many people are looking for a quick fix and want immediate gratification. How else can one explain when a young tennis player is trying to knock the cover off every ball and few land inside the lines?

When I was cultivating my junior career under the watchful eye of tennis pro Thomas Wright, he always made it clear what he wanted to see from me. “Every time you come off the court, Doug Browne, your tennis shirt better be soaked in sweat, or I’ll know that you didn’t work very hard,” Tom emphasized with passion. It is common for me to tell my academy kids that I practiced at least six hours a day each summer because I needed to work if I wanted to have a huge American Twist serve or a big overhead smash.

Yes, it is nice to be talented in any particular sport, but unless heavy dedication is included, forget it. If tennis were so easy (no one needs to practice long hours), then why would we be in awe of Novak Djokovic or other giants in the sport of tennis? As my tennis mentor, Jak Beardsworth, once offered, “No feet, no game, no future,” emphatically refers to players needing to be in constant motion to gain fluidity in order to be consistent and accurate.

Sorry, folks, but there are no short cuts in the world of excellence.

Over my career, I have been blessed to serve hundreds of successful business executives and one commonality is long hours and hard work. Successful people sacrifice time with their loved ones, and it is due to be fully committed to their careers to provide for their families. This drive to be outstanding is what one must have to be great on the tennis court, and unless one is willing to make certain commitments, then the player will not climb to the top of the mountain.

In summary, tennis is a heck of a lot more fun when we keep the ball in play. Set realistic, attainable goals, and you will love the game for a lifetime.