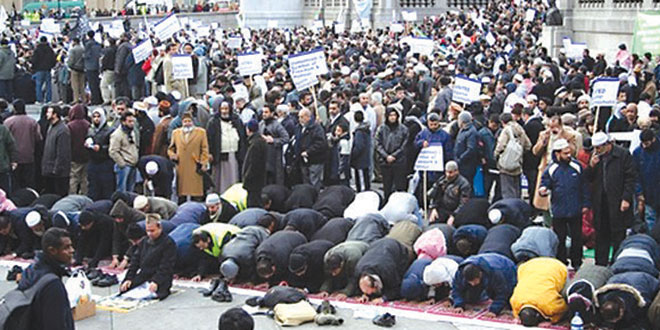 Those who do not believe in the adage “history repeats itself” are sadly mistaken. The recent and ongoing events in Europe clearly prove my point.

The Ottoman Empire (1299-1922) was an Islamic empire with the head of state carrying the title of “Caliph” (a person considered a political and religious successor to the prophet Muhammad, and a leader of the entire Muslim community). The Ottomans grew their empire by invading territories in the Middle East and Northern Africa, and converting the populations to Islam. The most daring of these invasions was the Siege of Vienna in 1529. This was an attempt by the Ottoman Empire, led by Suleiman the Magnificent, to capture the city of Vienna, Austria.

Reuters reported that “Europe is on the verge of

descending into utter chaos, as thousands of Muslim migrants are storming into Europe, passing through Turkey, Greece, Macedonia, Hungary and aiming at rich EU Countries of Germany, France and England where they will receive a long list of social and monetary benefits.”

When one looks at the photos and reads the extremely politically correct news stories of these invading migrants, they will only see heart wrenching photos of crying women and children. Unfortunately, these poor women and children are being used as human shields by the larger group of young men following them. Usage of women and children in this manner are no surprise to those of us who follow the tactics of the Islamic terrorists in the Middle East, and are familiar with the tactics of Hamas and Hezbollah in Lebanon and the West Bank. The photo of a little boy whose dead body washed up on a beach in Western Turkey was truly heartbreaking. However, the story was not told in full by the biased media. The boy’s father was actually granted asylum in Turkey and given a job where he was being paid a salary. However, he did not want to stay in a country where 99% of the population is Muslim. Instead, 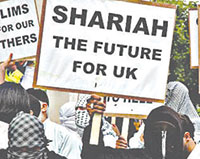 Sharia law for the United Kingdom.

he took a chance, with his little boy, to hop on a rubber dinghy and make a dangerous crossing to a Greek island. His goal was to reach Europe where he would become a part of this invasion, take advantage of a liberal welfare system, and in the interim, change the demographics of Europe once and for all.

We as Americans must watch what is going on in Europe very carefully and not be swayed by this vile manipulation of our emotions. This is probably as close to a jihad into Europe as one can imagine in the year 2015. We know that the so-called “refugees” do not want to assimilate into the Western culture of Europe. Those who follow such events already know that they have already established Sharia courts in England, police-free zones in France, entire segregated communities in Holland, Denmark and Sweden, and forced the otherwise neutral and civic government of Switzerland to enact laws limiting the building of new minarets in large numbers in their country.

Unfortunately, if we or the Europeans disagree with letting these so-called refugees from Afghanistan, Syria, Pakistan, Afghanistan and Iraq into our countries, the liberal Western media in Europe, as well as in the U.S., will be quick

to label us “heartless, hateful, racists and bigots,” and many more choice names.

Free and independent, democratically run countries have established borders. They also have the absolute right to say who can or can’t come into their countries. The situation may be too late to correct for most of the European countries, and may be getting close right here in the U.S., where we have lost control of our borders. The invasion is on in Europe, and millions upon millions of so-called “refugees,” whose identities are unknown at this moment will be settled in various countries, depleting their rather limited resources and, unfortunately, will never try to adapt to the culture and ethos of their host countries. It makes one wonder why the refugees escaping horror in these Middle Eastern countries do not settle in the homogenously Muslim countries of Saudi Arabia, Kuwait or Qatar? These three rich Muslim countries have accepted ZERO refugees to date.

What is happening in Europe may very soon be happening right here in our own country. Without secure borders we are allowing, and will continue to allow, anyone to decide to come and live here. According to the latest reports, a large number of men from Afghanistan, Iraq and Syria have

crossed our southern border, along with illegals from Mexico. Although some of them have been apprehended and jailed, it is not known how many have already gone to a neighborhood near you. Once again, the number one enemy of any free country – “political correctness” – will defeat us if we do not take action immediately. It is now expected that in 2016 the number of Muslim refugees coming to the U.S. from Syria will quadruple! Others will follow.

As we continue to be indoctrinated with the miserable liberal left wing media outlets in our country, and their politically correct so-called “news” broadcasts, the invasion of Europe continues. They come through Turkey and land on Greek islands along the Turkish coast. From there the trip continues, with Germany, France and England as the final destinations. Since the beginning of this year, 620,000 have arrived by sea, and it is expected that this number will reach 1.5 million by the end of the year. Only 25% of these people come from Syria.

According to some stories that do not make your local news outlets, the Syrian government actually sells these people passports, birth certificates and other identifying documents. They want them out of Syria. The rest come from

Iraq, Afghanistan, Pakistan, Eritrea, Somalia and Nigeria. When one examines the photos of these invaders, one will quickly agree with the official statistics issued by the Greek and Turkish governments; 75% of these people are men under the age of 50!

History is definitely repeating itself, and this invasion of Europe without armies, without cannons or rifles, may be succeeding where the Ottoman Turks did not some 500 years ago! It is predicted that in the next 25 years Europe may have a population consisting of around 40% Muslims. In itself, that is not something to be concerned with, as under normal circumstances, diversity of peoples and religions may not be such a bad thing. However, we are not living in normal times or circumstances. The problem is the fact that these 40% refuse to integrate, refuse to assimilate and furthermore try to convert the existing populations to their beliefs.

I sincerely hope that we do not fall into the same trap and allow what is happening to the European Union happen to us here in America.

At the present time, I am not hopeful.