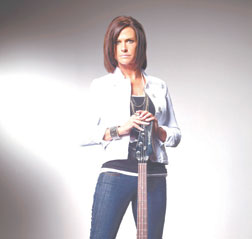 The Annual Marco Island Seafood Festival always features great seafood and great music. In its fourth year, the event continues to grow, featuring some of the best local entertainers in the area. While attending the two-day event, to be held Saturday, March 24 and Sunday, March 25, make sure to stop and listen to local music sensation, Gema Pearl.

Spectra Records recording artist, Gema Pearl will be performing live at the Seafood Festival from 4:30 to 6:00 PM on Saturday, March 24. Gema will be singing original songs from her first solo album. She will also perform a few covers, such as the songs “Forever,” and “I Was Made For Loving You” by KISS. Gema reworked both of these songs to be featured on the upcoming “Shout Out Loud: A Tribute to KISS” album, due out in stores this spring.

Gema’s musical background, more or less, begins at birth. By the age of three she had a love of gospel music and Barbara Streisand, thanks to her mother’s influence. She sang her first solo on Mother’s Day at her family’s church in Texas.

A true Texan at heart, Gema had her eyes set on becoming a Dallas cheerleader, runway model and ballet dancer, but fate had other plans. Gema was in a catastrophic car accident at the age of sixteen, initially putting her into a comatose state and ending in nearly two years of rehabilitation and being told she would never bear children. Throughout this time Gema did not give up. “I take challenges as, ‘you can’t beat me.’ When I face a challenge, I will do anything to win. That’s what my mother taught me; to be very tough and to just stick your boot heels in and go with it,” she explains.

From a full body cast to one brace after the next, Gema continued to progress physically and turned to her first passion, music, as a way to help heal. She joined her first band the same year she had her accident and went out on the road after high school with her band, “Mistress and Eden” for about three years. “We did the circuit. It was the eighties, it was fun. We traveled in a yellow bus. I wouldn’t take it back, it was hysterical.”

She then moved to Austin, Texas. “I found some great musicians and we had an all original band called, ‘Wildflower.’ I was with them for about three years and we did quite well. Austin’s a tough town, musically, but I had a great manager who taught me a lot. It was a wonderful experience.”

Then she did the “mom thing.” She had her first child, a daughter, something she was told early on would never happen for her. “I’m a very stubborn person. I do not take no for an answer from anyone, so I said, ‘I’m doing this.’” And she did. She now has three children, Ashley, Johnny and Jacob, who are the “lights of her life.”

Gema is currently Chief Operating Officer of a premier corporation in Naples, working up to fourteen hour days. She is also a single mother and has been busy working in the studio on her new album.

Working one’s way up to C.O.O. is no easy task. This meant putting music on hold for a while as Gema raised her family and furthered her career. She 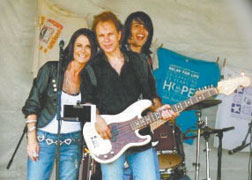 Gema, Lee and Johnny performing at Relay for Life.

stepped back into the spotlight just last year, however, to help her son, Johnny, who inherited his mother’s musical intuition. Johnny, an excellent guitar player, wanted to perform at the annual Naples Relay for Life, an event that raises money for the American Cancer Society.

Gema called her friend, Lee Brovitz, recording artist/producer, to help make her son’s dream a reality. Brovitz, also a lifelong musician, agreed to let Gema and her son practice at Last Gasp Studio in Estero, owned by John McLane, a close friend to Lee. During that time, “I saw something and heard something in her performance and her voice that I have not seen since I worked with Cyndi (Lauper) in the eighties,” explains Brovitz. “Gema had so downplayed her own voice that I was even more blown away when I finally heard her sing. I thought to myself, ‘I’ve got to do something here.’”

From this point on, the ball started rolling.

The Relay for Life event was a blast for Johnny, Gema and Lee. Following that, Lee helped Gema produce the two KISS songs soon to be released and has been working with her on her album.

Her debut will feature original songs written by both Gema and Lee as well as some other famous songwriters. Henry Gross, best known for his 70’s hit, “Shannon,” has also written a song for Gema. “When I was a little girl, ‘Shannon’ meant so much to me. It was my favorite song. I had a dog, Frito Bandito, that died, and that song got me through the death of my dog. I have always idolized him. He is an amazing songwriter,” she adds. Henry and Lee have co-written two other songs for the album as well.

Of her time in the studio, Gema says, “it’s the most amazing time I’ve ever had. To be working with someone like Lee who knows so much about the business has been great for me. I’m just so excited.”

As for how Gema feels about her new record, “I want to have fun. My main priority is of course my children and their stability and my day job, but I also want to pursue this to the fullest I can. Just keep doing it and enjoying it and hopefully inspire other people to follow their dreams. It’s never too late. I’m a true testament to that. It’s never too late to take the time to do what you love.”

Lee describes her music as, “a rock/blues style with some country involved that’s really about empowering and overcoming.” These are themes that have remained constant throughout Gema’s life. Her goal is to share this message as much as possible with others.

“I embrace the challenges and the struggles of the past. I always want to be a good role model and to inspire people, especially my children, because they are the reason why I breathe. To maybe leave them a little legacy with this record would mean the world to me that they could say, ‘that’s my mom’ and be proud.” Clearly, they already are.

Don’t miss Gema’s first solo appearance Saturday, March 24th at Veterans Park during the Fourth Annual Seafood Festival. Look for her to perform at upcoming family-friendly festivals and fairs and don’t forget to pick up a copy of her debut CD to be released this summer. For more information visit PatHorganTalent.com or email info@PatHorganTalent.com