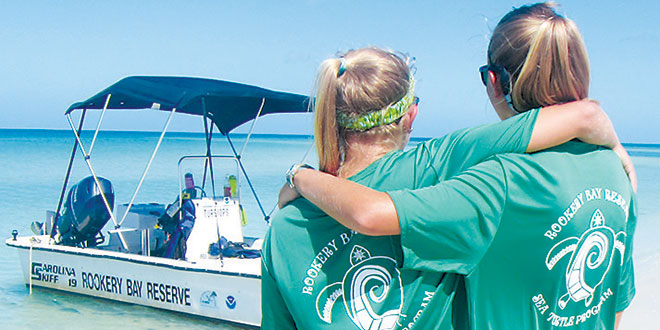 With 110,000 acres of coastal lands and waters that protect 150 species of birds and many threatened and endangered animals, Rookery Bay National Estuarine Research Reserve has a big responsibility– and a devoted team of volunteers that work daily with staff to help achieve it. Through the Reserve’s citizen support organization, Friends of Rookery Bay, volunteers and interns are assisting with a variety of duties, from taking care of the butterfly garden at the Environmental Learning Center to maintaining beach-nesting bird area postings, and even monitoring sea turtle nests at the Cape Romano complex.

Two young women, Sarah Norris and Anna Windle, filled this summer’s internship positions in the sea turtle monitoring program and are conducting their work from the Ten Thousand Islands Field Station through October. This facility also serves as the hub for the Team OCEAN stewardship program, many of the reserve’s monitoring programs, and research conducted by visiting scientists.

Sarah Norris, from Bradenton, Florida, is a 2013 graduate of Florida Gulf Coast University. She enjoys the beach, being outdoors, 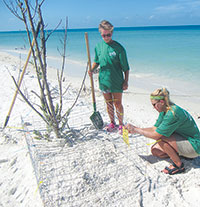 Interns and volunteers place cages over turtle nests to protect them from predators.

reading and crafting. She will be returning to FGCU this summer to pursue a master’s degree in environmental science. Her internship is funded by the Friends of Rookery Bay.

“I really love Southwest Florida and turtles,’’ said Norris. “I would love to have a career in marine conservation, specifically with sea turtles. I think they are fascinating creatures.”

Norris lucked out on her first week on turtle patrol when she and Jill Schmid, one of the Rookery Bay researchers, found the first nest of the summer on the northern tip of Morgan Beach. A short, faded out crawl led to the eggs, which they secured by putting up a wire cage to deter predators, such as raccoons.

Anna Windle is from Elkton, Maryland, and is a student at Washington College. She is studying environmental science and enjoys reading, running and crafting when she’s not monitoring the Southwest Florida turtle population. She chose the Rookery Bay Reserve internship because of its location. Windle hopes to get her master’s degree in marine science and one day

Sarah Norris found the first nest of the season on May 8. PHOTOS BY RENEE WILSON

research the biology of marine animals.

“I would love to do more research on sea turtles in the future or get a job working to protect them,” Windle said.

Windle applied for the Reserve’s internship through the National Oceanic and Atmospheric Administration Internship Program. This program connects students at several colleges around the nation with research internships at marine laboratories and other institutions, such as Rookery Bay Reserve. Interns from this program demonstrate a high level of commitment and professionalism, and gain valuable experience working in a research lab, performing data analysis and conducting field work. This is the third year the Reserve has received a student from a NOAA program for the summer sea turtle internship. 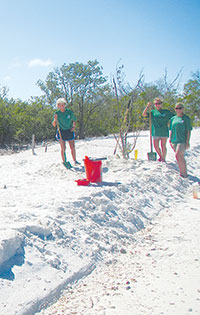 The monitoring crew scour beaches on Cape Romano looking for turtle crawls,which usually lead them to the nest.

the Ten Thousand Islands five days a week during nesting season (May through October), rain or shine. All volunteers are trained to locate nests and place cages over them to protect the eggs from predators.

While interning at the Reserve, these young women will have the opportunity to be involved in many activities, working alongside researchers and other staff to gain knowledge and experience. They are also developing outreach skills by hosting a monthly website blog and delivering a final presentation to staff and volunteers to share the results of their work and the knowledge they gained.

Rookery Bay National Estuarine Research Reserve is managed by the Florida Department of Environmental Protection’s Florida Coastal Office, in cooperation with NOAA, and serves as an outdoor classroom and laboratory for students and scientists from around the world.

For more information on the Reserve or to volunteer with the sea turtle monitoring program, visit www.rookerybay.org.

Renee Wilson is Communications Coordinator at Rookery Bay National Estuarine Research Reserve. She has been a Florida resident since 1986 has joined the staff at the reserve in 2000.