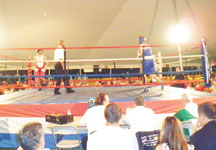 Waiting for the bell!

The first of hopefully, many International Amateur Boxing Shows was held Saturday, November 12th, at Veterans Park on Elkcam Circle. The show was put together by longtime Marco resident, Richie Stoltenberg, in order to bring together Team New Jersey and Team Ireland for a battle royale that the residents of Marco were able to enjoy for a one time entry fee. The fee was donated to this non-profit group’s charity.

Even though each team respectively, was made up of young adult fighters from each territory, Marco Island had its own representation within the ring. CJ Muntwyler was asked to take the ring for one of the fights on Saturday night. John Russell, CJ’s trainer, knew Richie Stoltenberg and a spot was reserved within the fight for CJ. For those who aren’t familiar, John Russell was the coach for Buster Douglass, another grand fighter who took up residence on the beaches of Marco Island. I had the opportunity to talk to CJ while at a local Irish eatery, O’Donoghue’s, the night before the fight. He was hopeful for his win in the fight.

O’Donoghue’s Bar and Grill entertained both teams, their coaches and families that evening. The party was raging and spirits were high with all of the members of the Boxing event listening to authentic Irish music and eating elegant home cooked food. Everyone was just happy to be here after months of preparation and training.

I had the pleasure of speaking with Ed Leahy, the coach for New Jersey’s team. His team is part of the Dover Boxing Club, which he and Richie started in New Jersey some years back. I also had the opportunity to speak with Paul Johnson, the coach for Ireland’s team. Both Paul and Ed were happy to have been contacted by Richie to visit “…beautiful Marco Island for such a great event!”

Before the evening’s close, Richie made a few sobering remarks about why this event had been started, and urged potential donors to contribute to a cause that helps so many young people. Richie had this to say about the International Amateur Boxing Show, “The purpose of each of the teams and the International Boxing Show is to keep kids off the streets, away from drugs and keep them in the gyms and the boxing ring for organized character building and fun.”

The next day, all of the kids whom Richie, Ed and Paul spoke so highly of were rapped and ready to fight at the pre- ceremony for the matches. The National Anthem was sung by Mary Jo O’Regan and the team gifts were exchanged. While the pre-ceremony festivities were taking place, food & drinks were being served by a catering group from O’Donoghue’s, which was run by Chef Rick Rubbell. They served Corned Beef and Prime Rib sandwiches with wine, soda and other beverages, good comfort food on a cold night!

The first bout was between Clarke Brightwell of Florida and Jordan Swain of Ireland. Each of three rounds was started by beautiful ring girls holding the round number for each respective round. Each round lasted approximately two minutes and Jordan was congratulated as the win- ner of Bout 1. The crowd went wild as this new champion left the ring.

Bout 2 was fought by CJ Muntwyler of Marco Island and Stephen Simon of Florida. The crowd cheered for the success of our own CJ. After each round, John Russell, CJ’s coach, would go over to him and give him words of inspiration in order to help him keep his mind on the fight and motivate him to take down his opponent. After their three round fight ended, the crowd cheered as CJ was named the winner.

There were no losers in this very exciting, unique event. The proceeds will help the International Amateur Boxing Show bring the sport of boxing to many kids who might otherwise be tempted by the excesses of the world of the street, petty crime and drugs. Richie expressed the hope that similar boxing shows will be presented for many years to come. He invited the audience and the larger Marco Island community to donate to the cause, one which he believes is quite important. He welcomes email to: rstolts@live.com