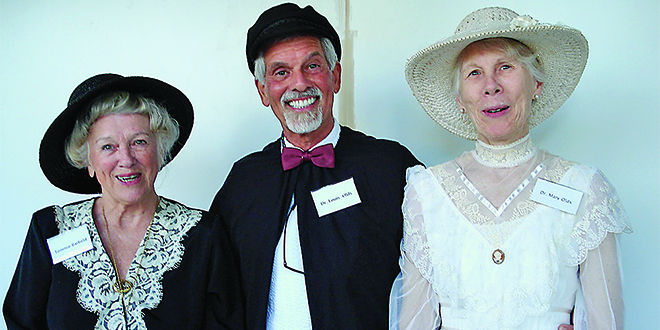 The Marco Island Historical Museum (MIHM) and the Marco Island Historical Society (MIHS) recently hosted a reception for the unveiling of their third and final exhibit at the museum. The Pioneer Era – A Tale of Two Villages is the story of two villages, one to the north and one to the south, that were created through the hard work, determination and resilience of early settlers. The land of these villages is now known as Marco Island, our beloved home.

The exhibit is not just a union of the two early settlements. It is a union of two eras. We learn the story of our early pioneers through displays of old photographs and artifacts from the late 18th and early 20th centuries. But the exhibit comes to life through 21st century high tech interactive tools.

Austin Bell, curator of collections for the Marco Island Historical Society, said “Enhancing these fascinating objects and images are amazing original animations, illustrations and replicas produced by Creative Arts, such as a replica Florida cracker cabin turned movie theater, complete with a remarkable lifelike view from the front porch; a replica Collier City sign which once stood at the ferry landing at Isles of Capri to cross the Marco River before any bridges were built to the island; an animated illustration of Capt. Bill Collier’s original patent application, filed in 1908, for a clam dredge, showing how it worked to pull clams into the dredge from underwater clam beds; and an interactive animation that shows the evolution over time of four prominent buildings along the Marco waterfront. Indeed, this exhibit presents the highest levels of interactivity and technology in any of our museum’s exhibits.”

The exhibit tells the story of the area’s first families – Barfield, Olds, Collier, Burnham, Doxsee and many others. As a matter of fact, several of our early pioneers made appearances at the reception, greeting the guests in a receiving line at the entrance. These historical reenactors realistically portrayed their characters throughout the evening, sharing stories of their early pioneer experiences. It was hard to believe that you weren’t really chatting with Tommie Barfield, Mollie Hamilton, and Drs. Louis and Mary Olds.

Perhaps the most touching display is the peek into the life of a 14-year-old girl. Saloma Olds, the daughter of Louis and Mary Olds, kept a detailed journal of the life of her family beginning in 1913. The original hand-written manuscript can be viewed with an interactive high tech tablet.

Many signs throughout the exhibit invite us to “Please touch.” One such display offers a feel for tabby mortar, a cement-like mixture of shell, water, sand and quicklime. Quicklime was created by crushing and burning oyster shells into a powder mixed with water. Captain John F. Horr’s home on Horr’s Island (now Key Marco) was built from tabby mortar.

Floridians always live with a concern and watch for hurricanes. Today, through weather technology, we are well warned of approaching storms. Imagine the lives of the early pioneers who had no way to anticipate storm severity. The exhibit’s hurricane display quotes Louise Anderson, the granddaughter of J. H.“Stud” Doxsee, who said, “You generally found out a hurricane was coming when it got there.” Photos display the story of the early “Cuba Hurricane,” while a slideshow depicts the devastation of Hurricane Donna in 1960.

Written words cannot adequately describe the quality and value of this incredible exhibit. One must see it to truly experience the impact. Its location within the museum halls, situated between the beginning Paradise Era of our Native Americans and the Modern Marco Island Era of 1962 to the present, leads us on an a breathtaking realistic walk through time.

Pat Rutledge, executive director of the Marco Island Historical Society sums it up very well in saying, “Almost 23 years ago, a dream was born. That dream was to build a museum on Marco Island for residents and visitors alike so that they could experience the 10,000 years of our island’s history. The Marco Island Historical Society was initially founded to keep the stories of the pioneer families of Marco Island from disappearing as the last family members moved off the island or passed away. We were at risk of losing those stories from our grasp. With the opening of the Pioneer Era exhibit, those stories are preserved forever.”

The Marco Island Historical Museum is located at 180 S. Heathwood Drive and is open Tuesday through Saturday, 9 AM to 4 PM.
Admission is free and the site is handicapped accessible. For more information, please visit themihs.org or call 239-642-1440.