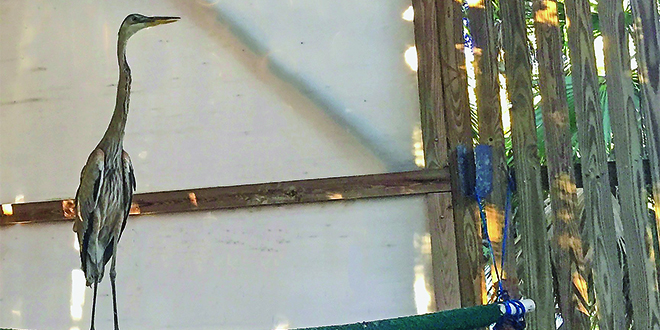 Submitted Photo: Great Blue Heron inside his outdoor enclosure at the wildlife hospital.

Recently, the injured great blue heron, which was reported on in the prior issue of Coastal Breeze News, was finally rescued and is recovering nicely.

It was a rescue of opportunity. The Boros family from Manhattan, Illinois was enjoying their last day on the beach for fishing and shell collecting before heading back home. When the family headed to the Gulf side of Tigertail Beach, they found the injured heron just hanging around looking for handouts. The family took action to save the bird. Bob Boros gently snagged the injured heron with his fishing line, while his wife Kristen covered the bird with a towel to keep it calm. Observers reported that the injured heron did not put up much resistance.

Bob carefully removed the tangled line. From the Gulf side, one of the beach goers called the Conservancy, and they in turn called Park Ranger Carol Buckler from Tigertail Beach. She came along with a large crate and transported the injured heron to the Conservancy’s wildlife clinic, where they removed the 9” fishing lure from its neck and took x-rays 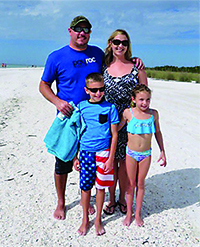 to see if it swallowed anything foreign.

After his rescue experience, Bob Boros shared this sentiment: “My kids will always remember this day. I’m very grateful to have been a part in saving the bird’s life.”

Thanks to many concerned citizens and the help of the Boros family, the injured heron is at the von Arx Wildlife hospital getting the care it needs.

Following the rescue, there was great news on the great blue heron’s condition. Joanna Fitzgerald, Director of the Von Arx Wildlife Hospital, has just reported that the injured great blue heron is recovering well after the removal of a 9” fishing lure with treble hooks embedded in his neck. He has been placed in an outside recovery enclosure surrounded with natural vegetation. Once fully recovered, the heron will be released back to the area where it was found. No release date has been set. The courtship and nesting season for Great Blue Herons has already started. With luck, our heron will make a speedy recovery to be able to participate in this annual ritual. 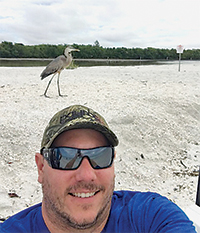 Photo by Bob Boros:Bob Boros took this selfie with the heron. When he realized a fishing lure hung from the heron’s neck, he took action.

Joanna Fitzgerald is hoping that the “rescue does not stop with this one bird.” Last year, the hospital took in 3,852 injured, sick or orphaned animals for care and rehabilitation. Fifty percent of these were released back into their natural environment.

Von Arx Wildlife Hospital desperately needs volunteers. If you care about wild things and wild places, consider becoming an active participant in our nature’s preservation and protection. Joanna added that, “the injuries and suffering this heron endured are not unique. Hundreds of animals in Southwest Florida are injured daily as they try to coexist in an environment near humans. The great blue heron speaks for all injured creatures in need of care.”

Please get involved and support organizations that are committed to protecting the environment and saving wildlife. Consider becoming a Critter Courier by checking out the Conservancy’s website at www.conservancy.org. As a volunteer, you are one heartbeat away from saving an injured animal’s life.