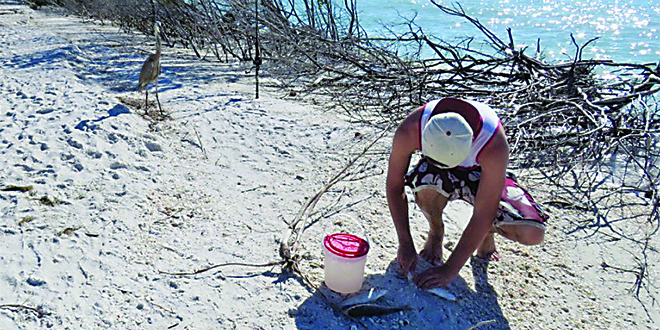 This angler is cutting his bait fish into small bits for the heron to feed.

Since Thanksgiving, an injured great blue heron (GBH) has been walking around Tigertail Beach lagoon with a fishing lure three inches long dangling from its delicate, long neck. This heron is unable to swallow food naturally; it has lost weight, its feathers looking dull and matted and is weaker with each passing day. The heron was a likely victim of a careless angler casting near wading birds.

The GBH has a daily routine appearing near Tigertail Beach lagoon daily between 10:30 AM to 4 PM. It has been observed following fishermen and stalking their bait buckets. Some anglers take pity, and cut their bait fish into small pieces with the hope that the heron is able to swallow.

A healthy great blue heron stands majestically at 3 to 4 feet, with a wingspan of almost 6 feet. It has blue-gray feathers on most of its body and a plume of feathers on its back and chest. The injured GBH is looking very weak, and it has lost 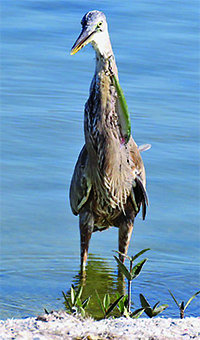 the luster of its beautiful feathers.

The heron has attracted a small group of concerned “heron watchers.” They visit the lagoon daily, make notes and take updated photos. One of them is Christiane Richelmi, who has shared her photos with the City of Marco Island’s Beach Advisory Committee. With a sad heart she wrote, “I can’t imagine there is nobody showing enough mercy to save this bird. This huge bird must be saved from a bad death.”

Numerous attempts have been made to catch the injured heron. Adam DiNuovo and Allie Smith, both from Audubon of Western Everglades, almost caught the bird, but had to let go because of its long stabbing beak, which can inflict serious injuries to untrained rescuers. They both wished they had a large casting net. The injured heron may appear tame, walking within three to six feet of humans, but if approached closer, it will take flight.

“If the heron is able to fly upon approach, there

Since Thanksgiving, the Wildlife Clinic at the Conservancy of Southwest Florida and the Florida Fish and Wildlife Conservation Commission (FWC) continue to receive calls from residents on the injured heron. Friends of Tigertail Beach board members,

Linda Colombo and Susan LaGrotta have also reached out to both agencies for guidance and assistance. Chadd Chustz, Environmental Specialist from the City of Marco Island has been advised by both agencies that, “If the heron is able to fly away upon approach, there is not much we can do.” It is difficult to fathom how trained wildlife rescuers such as FWC, with cannon nets at their disposal, are waiting until the heron is weakened further to manually capture. It is a deadly waiting game for the majestic great blue heron.

The great blue heron is not alone in its struggle with injuries caused by fishing line and hooks. According to Chustz, “After red tide, fishing line injuries are the cause of most shorebird injuries and mortalities.”