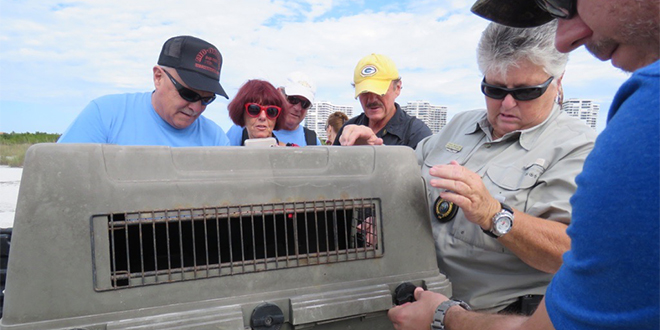 On Friday at midday, the injured Great Blue Heron was rescued.  Friday was the last day for the Boros family to enjoy the beach and do some fishing and shell collecting before heading back to Illinois.  They headed to the gulf side of Tigertail Beach where they found the injured Heron just hanging around looking for handouts.  It was a rescue of opportunity.  Bob Boros gently snagged the injured heron with his fishing line while his wife Kristen covered the bird with the towel to keep it calm.  Bob carefully removed the tangled line.  From the gulf-side, one of the beach goers called The Conservancy and they in turn called 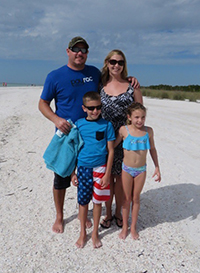 Park Ranger Carol Buckler from Tigertail Beach.  She came along with her large crate and transported the injured heron to the Conservancy’s wildlife clinic where they removed the 9” lure fishing from its neck and took x-rays to see if it swallowed anything foreign.  Thanks to many concerned citizens and the help of the Boros family from Illinois, the injured heron is at the Von Arx Wildlife hospital getting the care it needs.  Bob Boros has this to share on his rescue experience, “I really do feel like we saved his life and that makes me feel good about my life.”

Hopefully this heron will survive to participate in the courtship/nesting season at the lagoon.