In the Kitchen With Stan Saran 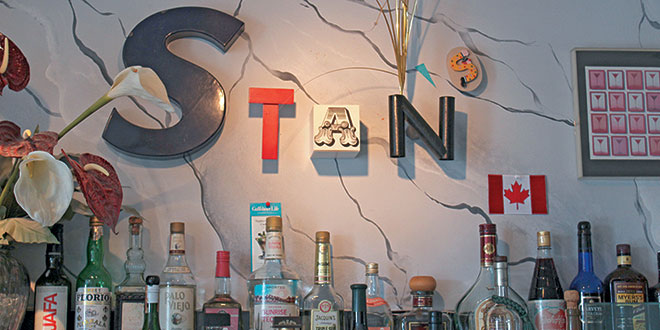 Stan Saran has been a Marco Island resident for a longtime. You may have heard of him. He lives in his own art gallery in what is perhaps the most colorful, bright blue building on the island. He is an artist, through and through. But unlike the average artist his mediums are limitless, his creativity inventive, and his style unbound. Coastal Breeze News met up with Stan so we could talk art and chocolate, which to him are interchangeable. He shared with us his recipe for spicy bacon chocolate cups.

Entering Stan’s home is like going back in time. But to a nonspecific, less organized time. It’s as if he hopped into a time machine and grabbed everything he could from the different eras and brought them back to his small, Miami/Art Deco-inspired apartment. He has

On the shelf artifacts and trinkets, on the counter Stan’s sculptures and artwork.

ancient Mayan artifacts along with artwork he made when he was sixteen. On one wall hang the paintings done by his late mother, and on another samples of some of the couture dresses he designed in the 1970s. His kitchen table is carved and etched out of glass, all done by him. And his bathroom acts as a gallery for his artwork from the 1960s because he ran out of wall space.

His kitchen may be the most interesting aspect of his home. The appliances were either a deep black or red, while the walls and the ceiling were painted a greyish white to mimic marble. Almost everything in his house doubles as art. Above his sink is a colorful sculpture he made to look like different food items, and above his stove, which is gas, is another

A sculpture by Stan hangs above his kitchen sink.

glass carving. Gas stoves are somewhat unusual on Marco, unless you’re a restaurant owner. Gas allows for the cook to control heat more readily, allowing for better distribution depending on what they’re making. It’s evident that Stan is as serious about cooking, as he is about his other artwork.

Back in the day Stan used to make his chocolate from scratch, which is sort of similar to making homemade coffee. It’s an involved process that includes roasting the cocoa beans, refining the chocolate and tempering it. But if you don’t have the right equipment, or even if you do have the right equipment, a lot can go wrong. While Stan agrees that nothing compares to real, homemade chocolate, the delicate operation is not conducive for the average home cook or baker. Nowadays Stan sticks to recipes that are 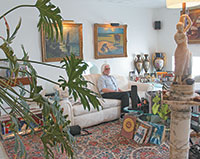 Stan in his art gallery/living room, under paintings by his late mother.

This recipe, though simple, is a fun one. But first I should warn you that these chocolates are spicy. If you’re not a fan of spice you may want to omit the cayenne pepper or double down the amount you add. But if you are a fan of hot food, like myself, then you’ll love these. The marriage between the chocolate and cayenne pepper is a harmonious one, with a long history. “Chocolate and chilies originated in Central America. Over 2,000 years ago the Mayans drank a concoction of chocolate and chilies. The tradition continues with you,” said Stan Saran.

The chocolates are spicy, sweet and savory all at the same time, which is interesting and unexpected. With each bite you taste something a little different.

The bacon added a layer of salty,

Stan’s gas stove, a mark of a dedicated cook.

savory goodness. That’s the beauty of Stan’s recipe it’s simple, yet so customizable. If you don’t eat bacon, feel free to dump the pig and just have the spicy chocolate. Or vice versa, it’s up to you. You could even get more creative and add other flavors such as cinnamon or allspice for a different feel.

When he’s not making delicious chocolates, Stan has been working on his new yoga technique, which he calls “Baraabar Yoga, The Yoga of Balance.” Baraabar Yoga is more of a philosophy than an exercise routine, but it can double as both. For more information check out: www.baraabaryoga.guru. 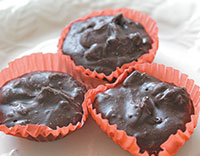 amounts of cayenne pepper and bacon bits and set aside.

3. Empty 12 oz. bag of candy melts into a microwave safe glass bowl. Set microwave to 50% power and cook for 30 seconds. Stir thoroughly, then continue to microwave at 15-second intervals until smooth and completely melted. Be careful not to overheat the chocolates or they will separate, crystalize and burn!

4. Once the chocolate is smooth and completely melted, quickly stir in cayenne pepper and bacon bits. Stir quickly so that the chocolate stays warm and liquid-y.

5. Using a teaspoon, fill each paper cup to the top. The chocolate will solidify within 5 minutes and should last a week, or a few months if refrigerated.

6. If you don’t like hot pepper or bacon- leave it out. But feel free to add your own touch like orange zest, sea salt, cinnamon or nutmeg-the possibilities are limitless!