In Search of Swiss Cheese 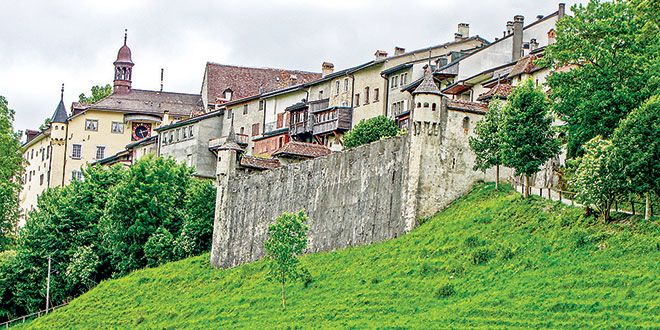 Outside the beautiful walled city of Gruyeres. photos by vickie kelber

Switzerland is known for its cheese. Most of us have eaten “Swiss” cheese. Yet, few of us have experienced true Swiss cheese, for most of what is sold at local deli counters is a cheaper, lower quality commodity produced either domestically or from another country. It is made from pasteurized milk from cows fed on silage and often contains artificial ingredients. True Swiss cheese has no milk treatment, no artificial ingredients, no preservatives and comes from cows fed only grass or hay; no silage is allowed for Swiss cheese.

The craft of cheesemaking in Switzerland dates back to the Middle Ages; its evolution has allowed agricultural use of difficult mountainous terrain. In the summer, cows are led up to the high ground where cheese is made on a daily basis. I’ve been told that there are about 600 cheesemakers in this small country; most of the milk still comes from modest farms and dairies and many of the cheesemakers operate by themselves or with just a few others. While the export of cheese makes up a small portion of the Swiss economy, in certain areas it is very important as a time honored tradition, as well as for the protection of the environment and tourism. There are strict production guidelines and quality controls for Swiss cheese.

Although there are many types of cheese made in Switzerland, most of the exports are of the Emmentaler, Gruyére, or Appenzeller variety. In the US, we are most familiar with Emmentaler, so called because it

Hikers meet the alpine bus carrying people and packages up to Griesalp while clouds hang in the trees.

is made in the valley (tal) of the Emme river. With a piquant flavor, it has small holes (“eyes”) in it caused by bubbles of carbon dioxide released as lactose is broken down by bacteria. If your “Swiss” cheese has large holes, then chances are it is not from Switzerland. A hard yellow cheese, Gruyére is commonly used for fondues. Appenzeller is spicy; its unique taste coming from a 700 year old secret herbal brine. A fourth type of cheese, produced only in the summer, alp käse, is popular in Switzerland and available for sale throughout the mountainous regions of the country. It’s flavor varies depending on the wild flowers, herbs, and grasses eaten by the cows grazing on high.

We made two treks in search of Swiss cheese, to meet cheesemakers and learn more about the process. One of our trips took us above the Kiental (Kien Valley) to a place called Griesalp in the Bernese Oberland. Legend has it that it was at the Hotel Bären in Kiental where Trotsky and Lenin planned the Russian Revolution; that the hotel has been featured on a Russian stamp perhaps lends some credibility to the story. In the early days of tourism, the only access to Griesalp and its hotel was by foot; women were carried on a chair by two men. Fortunately, today, a bus took us up on what is the steepest road used by coaches in Europe. The last part of the bus trip is a 28% incline; the view 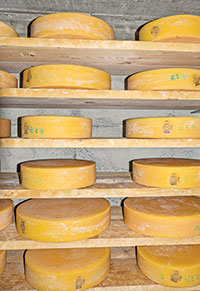 Cheese aging in the temperature and humidity controlled cheese hut in Griesalp.

breathtaking as the bus passed vertigo inducing gorges, thundering waterfalls and raging streams. A short walk from the end of the bus line, surrounded by snow capped peaks, led us to the cheesemaker’s hut in time to observe the process of turning the morning’s bounty of milk into alp käse.

After checking the quality of the milk, the cheesemaker poured it into a large copper vat where it was heated and stirred constantly. As it began to curdle, he used a cheese “harp” to help separate the curds from the whey. At just the right moment, he put his hands and arms in ice water because he was about to plunge them into the kettle where the milk was 115 degrees. Using cheesecloth, he scooped up the curds, quickly placing them into a press to mold them into rounds. The whey was then drained out; it was to be used as food for his pigs. All the equipment was scrupulously scrubbed clean.

The cheese wheels were transported to the cheese storage hut. They will sit for one day and then placed in a brine wash; it is the brine that will add to the aroma of the cheese. Afterward, they will be stored on shelves in the hut where the temperature and humidity are closely controlled. Consistency of those two is important in the aging process. As they age, the wheels will be rubbed with brine and turned, following a strict schedule. Soft cheese will age for a few weeks; harder cheese for 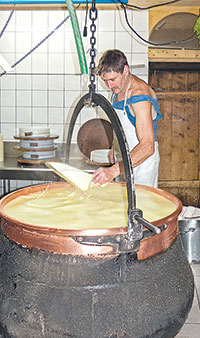 weeks, months, even years. Cheese can live for up to four years if kept at the correct humidity level. The milk from the day of our visit made about 45 kilos of cheese. Each wheel will receive a seal guaranteeing the origin, the date, and an individually assigned number.

Our second foray into cheesemaking took us to Gruyéres in the western, French speaking part of Switzerland. A picturesque medieval village worth a visit for its castle, fortifications, unique museums and charm, we stopped at La Maison du Gruyére. Here, exhibits and a film told the story of cheesemaking. We were able to observe through windows a larger, more mechanized version of the same techniques utilized at Griesalp. Under the watchful eye of master cheesemakers, following a recipe dating to the 1100s, the vats were stirred automatically; the stored wheels rotated by machine. Our visit was instructional, but not quite as charming as the toasty, close quarters of the wooden cheese hut high in the mountains.

Cheesemaking is truly an art in Switzerland, from its alpine method of “free range” herds and cultural traditions to its quality controlled processes. To maintain this way of life and enterprise, subsidies are substantial. Switzerland’s thriving economy is also a problem for its exports due to the strong value of the Swiss Franc. The government tries to compensate for this, as well as ensure perpetuation of tradition and quality product as well as perseverance of the country side through high subsidies. This is also a factor in the 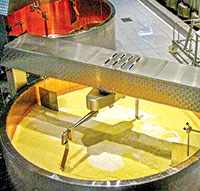 Cheese being made the modern way following old time traditions in Gruyeres.

importance of Switzerland not becoming a part of the European Union. Should they join the EU, these subsidies would have to stop; it would be an end to centuries of tradition and quality.

According to the Swiss Cheese Organization, the average Swiss consumes just over 21 kilograms (about 47 pounds) of cheese a year. One would think that so much cheese (not to mention the Swiss chocolate) might affect the health of this nation. Yet, according to the World Health Organization, life expectancy in Switzerland is almost 83 years; 80.5 for men and almost 85 for women. It ranks tenth (the US is thirty fourth) in the world for life expectancy.

Next time you shop for cheese, treat yourself and ask for authentic Swiss cheese. After all, at the 2014 World Championship Cheese contest in Madison, Wisconsin, a Swiss Emmentaler beat out 2,615 other entries from 22 countries to take top title. If you visit Switzerland and don’t have the opportunity to visit a local cheesemaker as we did, seek out one of the many “show dairies” open to the public. Consult the website www. myswitzerland.com for more information.