In Defense of Defiance 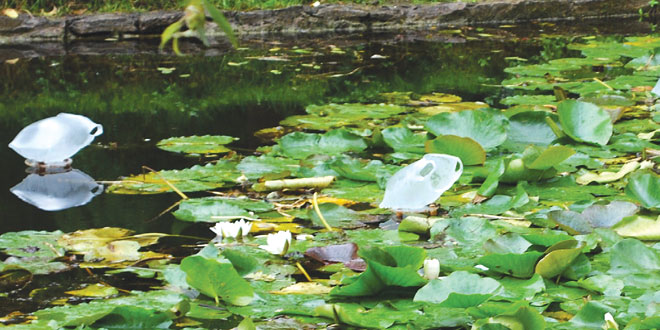 Ah! Back from sabbatical… and by sabbatical I mean vacation to Ireland. Before leaving, I wrote a column about how traveling can refresh one’s perspective, or even grant a whole new one (and it seems my perspective was woefully in need of a tune-up). So, for you generous readers who did not begrudge me a column-free month, I bring you further thoughts on perspective inspired first by a wholly American occurrence, and further by personal immersion into a distant culture.

Shortly before I left, long-distance swimmer Diana Nyad had, on her fifth attempt, completed her swim from Cuba to Key West without aid of a shark-cage. She was 64 years old. She defied all nay-sayers, all stigmas and all odds. And there-in lies the verb: defied; defiance. The word rolled around my head like a marble during my long flight over the Atlantic. I’ve

written often about the must-haves in the toolbox for an artful life: honesty, love, courage, faith, originality, patience, and persistence. Well, here’s another biggie: defiance.

I remember Nyad’s earlier attempts accompanied by much fanfare and media coverage; crowds on the shore in Cuba, boats trailing her entire crossing, mobs waiting ashore in Key West. But with each thwarted attempt the coverage thinned and her heroic status slowly disintegrated into punch-lines on late-night talk shows and in social gatherings.

Oh for pity’s sake, just give it up!

But she didn’t. She didn’t give it up. Like most Americans, I learned about her successful swim on September 2nd, when she was just five miles off the coast of Key West. No prior fanfare, no coverage of her herculean labors; just her and her team for 50+ hours. Until the very end, suddenly everyone just wanted to devour her. Criticisms can be 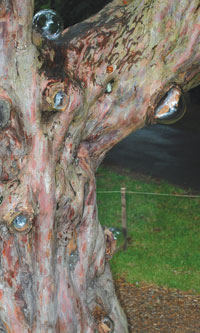 As a great lover of whimsy, I really fell for Tree Dressings by Mags O’Dea, glass bubbles were made to custom fit the knots in an ancient cedar tree – giving the impression the tree was blowing bubbles!

cruel, and crueler when made public. Criticisms of Nyad must have cut her deeply – cut her, yes, but not killed her, or her spirit, or her determination. That’s defiance.

And how does this relate to an artful life? Perfectly. Those living an artful life accept that they are the blazers of their own trails, the ones who make the followers of convention most uncomfortable, the ones who set themselves up to be targets of derision.

While in Ireland, I was able to step away from my somewhat cloistered artistic community and witness first-hand the brave, the courageous, the defiant artists half a world away. I could not judge them by any standards I’d previously adopted. They were wild-cards, and they were brilliant.

I enjoyed the many galleries and museums I visited, but was most fortunate to have a guided tour of Sculpture in Context, an annual exhibition held 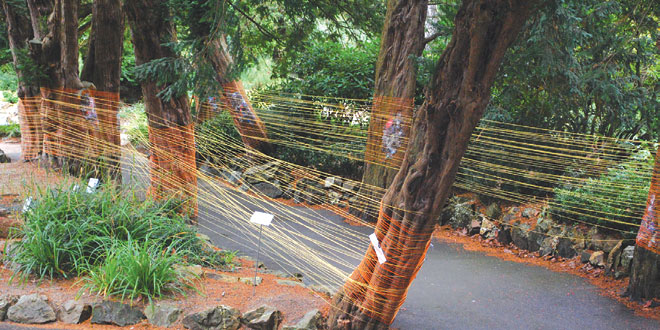 A forest trail is connected by colorful strings that also enmesh a mixture of textiles against the tree trunks, by Clodagh Evelyn Kelly. PHOTOS BY TARA O’NEILL

at the National Botanical Gardens near Dublin. Over 150 outrageous sculptures were made to fit into specific – and often unexpected – sites throughout the 50-acre botanical paradise, including the Great Palm House, and Curvilinear Range of glasshouses. (There was also a selection of smaller sculptures exhibited in the gallery above the visitor center.)

These artists, every one of them, were being lauded for their independent thinking and risky originality… but I can only guess what odds they had to defy to reach this prestigious plateau. Having more time I would have gone back over and again, but my journey had other plans. Instead, I revisit the exhibition every few days at www.sculptureincontext.com.

“Applause, applause, life is our cause…” Joni Mitchell