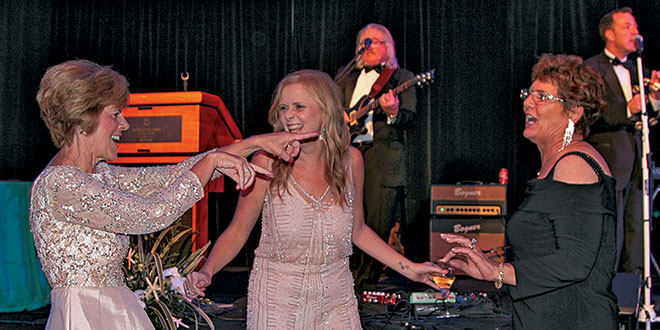 The beautiful Marco Island Marriott Beach Resort set an elegant scene for the American Cancer Society’s Imagination Ball. Guests filled the beach pavilion -not just to dine and dance- but united in a common purpose: To finish the fight against cancer.

Each year the Marco Island branch of the American Cancer Society (ACS) holds a gala fundraiser that helps support cancer research for better treatments and to find a cure; Funds raised also provide assistance for those battling the disease.

When the fundraising totals came in for last year’s Imagination Ball, little did anyone know it would end up being one of the state’s most successful ACS galas of the year. 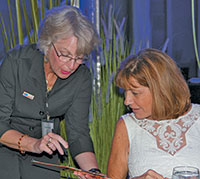 co-chairs, knew it would be a daunting task to surpass that mark in 2016, but it did not deter them. Thanks to the Shanahans and their team of volunteers, this year’s event, themed “Wash Away Cancer,” managed to even top last year’s award-winning gala. The hardworking Imagination Ball committee members behind-the-scenes are Heidi Berge, Nancy Carrington, Mickey Flynn, Corrie Grado, Dennis Pidherny, Rob Reiley, Rachel Schenk, Jada Shigley, Brandy Simpson and Neil and Rebecca Snyder.

BMO Harris Bank was the presenting sponsor of the 2016 Imagination Ball.

During the evening, the Grado Award was presented to distinguished recipients, Bill and Karen Young. The award, named after John and Corrie Grado, founders of the Marco Island ACS office, was presented 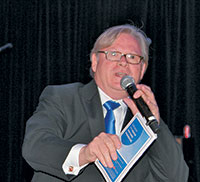 to the Youngs by Corrie Grado. The honorees were chosen for their significant efforts and contribution in the fight against cancer. The Youngs are dedicated ACS supporters who care deeply about the mission to find a cure.

NBC-2 news anchor Stacey Deffenbaugh was the emcee and speaker. Stacey spoke on behalf of featured guest, Jada Shigley. She read aloud Jada’s poignant words describing her personal journey with cancer. Many in the audience know and love Jada, and her young family. Jada is known to be the first to volunteer her service to assist others, and this evening, guests were thrilled to recognize and support her with a standing ovation.

The evening included a variety of sought-after silent auction items, as well as high-end live auctions, where bidders 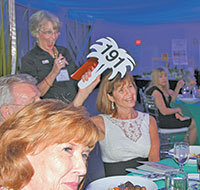 with paddles tried to outbid each other as auctioneer Rick Gallo kept the crowd on their toes, and bidders interested.

The event was an all-out success – with guests enjoying a great evening, all in support of a great cause. Confirming this success, ACS Senior Manager Distinguished Events, Lisa Honig said, “We project the tally to be $235,000.00. That puts the event ahead of previous events!”

Want to help support the American Cancer Society’s fight to end cancer? Come to Relay for Life at Mackle Park on April 9th from 10 AM to 10 PM.