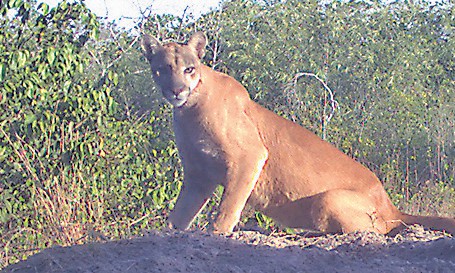 Last month a group of biologists from the Rookery Bay National Estuarine Research Reserve shared something remarkable. Images captured on a Reconyx wildlife camera showed a young Florida panther lingering near a known crocodile nesting area on the reserve. According to Rookery Bay, the panther hung around for about 30 minutes.

Images of the panther have been shared on Facebook, reaching thousands of people. There’s also a YouTube video (link below) of the encounter. In the video the panther is seen casually lounging near the nest. At one point curiosity gets the best of him, and he begins investigating the camera.

The images captured are significant, as both the Florida panther and crocodile are considered endangered species. According to the National Wildlife Federation, there are only about 100 Florida panthers left in the wild.

“As caretakers of 110,000 acres of coastal wilderness in South Florida, we work closely with Florida Fish & Wildlife Conservation Commission to manage habitat for all native species including Florida panther and others that are listed as Threatened or Endangered.” said Steve Bertone, Resource Management Specialist for Rookery Bay National Estuarine Research Reserve.

The camera was initially set up at the nest as part of Rookery Bay’s “listed species monitoring program” in order to document nesting habits as well as predation.

On discovering the photos of the Florida panther Bertone says, “Finding these photos on my wildlife camera was a great surprise. The imagery is clear enough to enable panther biologists to possibly identify the individual through scars and other markings, and also provide a rare opportunity to observe endangered species behavior.”

According to Gary Lytton, Executive Director to the reserve, the video is also important because it indicates that Florida panthers are frequenting Rookery Bay Reserve, which acts as a habitat for many endangered and threatened species.

You can check the video out for yourself at: www.youtube.com/watch?v=g0ia lilnGF8&feature=youtu.be.

For more information about the reserve make sure to visit: Rookerybay.org.