I’ll show you my axe if you show me yours

This unique piece, called a polk-a-lay-lee was once popular amongst surfers.

Show Your Axe is one of those hidden spots on Marco that reminds true musicians of what small-town music shops are all about. Owner, Bob Duffy, has run the store, at its current location of 1165 Bald Eagle Drive for over three years now, but his first interaction with a musical instrument came long before he opened his doors on Marco.

Duffy is an extremely interesting individual. He started his first business in his parents’ basement; a homemade candle-making company, when he was fifteen. Only a few years later, he sold the successful company. Since then he has owned myriad of businesses. “Some were successes, others weren’t, he adds, “but you always learn from each experience.”

Show Your Axe is definitely one of Bob’s successful ventures. That’s because he has spent the majority of his life around musical instruments, with a special love for all things stringed. Duffy built his first guitar with two by four pieces of wood at the age of fourteen. He has been building and fixing guitars, banjos, basses, ukeleles and more ever since. His reputation for refurbishing is so well known that local musicians such as J. Robert and Raiford Starke bring their instruments to his shop for fixing.

Among many other projects, Duffy is currently restoring a 1973 Gibson Les Paul guitar “that had been lying in some guy’s trailer and it was soaking wet. All the paint was off and the wood was stained. I had to clean it, bleach it, add the sunburst finish and then clear coat it with ten coats of lacquer, but it’s brought it back to almost its original finish,” he explains.

Many of the instruments in his shop are refurbished

Bob built this guitar out of Brazilian Tiger Wood.

just like the 1973 Gibson Les Paul. Similar to the show, “American Pickers,” Bob finds his treasures in what others think is trash. “I go all over the place. I get instruments from estate sales, auctions, private individuals. I travel around and get things from all over the country. It’s hard to find them so you really have to dig, but I know some secrets on how to find things,” he comments with a slight smile.

Bob has personally handmade a number of guitars for sale in the shop, but each and every one has been somehow manipulated by him so it will play at peak performance. Show Your Axe is also a dealer for guitar companies such as Waterstone and Michael Kelley, but even these factory-made guitars are slightly modified by Bob. “When new guitars come from the factory they are not set up properly. Most big guitar stores just put them on the wall, but Bob works on them to make them very playable.” adds Lee Brovitz, the shop’s music teacher and online sales guru.

Brovitz has been working with Duffy at Show Your Axe for over a year and a half. He has also had a long history with music, playing his first gig at a bar at the age of thirteen in Rochester, New York. He studied music at Berkeley in Boston and eventually found himself immersed in the 80’s pop music scene, playing bass for the likes of Cyndi Lauper, among many others. Brovitz still travels and plays with famous musicians, such as The Byrds and Tommy Roe of the 60’s rock and pop era.

Brovitz is also an excellent teacher of both the bass and standard guitar. Having musical 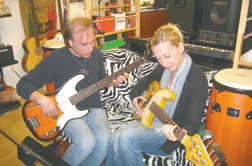 training from Berkeley, Lee can teach his students how to properly read music sheets, something that self-trained students have less success with. Lee offers private lessons through Bob’s shop. The two are currently expanding the shop’s space to offer a better area for lessons and are planning to offer percussion lessons in the near future.

Bob and Lee work well together as each brings a different piece of musical expertise to the store. As Bob explains, “People end up going to these larger stores to buy a guitar and they end up bringing it here because they are not set up and are really hard to play. We set them up so they play properly. We can even custom set them so they are easier to play, especially for young people. Learning to play the guitar can already be frustrating, so if I set it up where it’s really easy to hold strings down, it makes it much easier for a student to have the patience to stick with it.”

This theory has worked well as they are finding more and more students eager to learn to play the guitar.

The shop is not strictly guitar and guitar lessons, however. Duffy has a wide range of all things musical. He sells guitar, banjo and ukelele strings, guitar picks and polish, harmonicas, amplifiers, keyboards, drums, microphones, all different kinds of pedals, books, magazines, music stands and the list goes on. Many of Duffy’s products can be found online at his eBay store, stores.ebay.com/ Show-Your-Axe. Brovitz tediously manages the over 80 items that are currently available for purchase through this online medium. 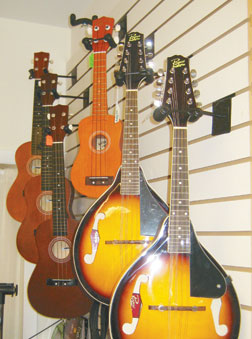 More than just a guitar shop.

one’s special guitar. This is how Show Your Axe got its name. Bob’s wife Kathy, always clever and witty, thought up the name as Bob was featuring these display cases for sale. As “axe” is slang for a guitar, the name was fitting… and funny.

Bob also provides instrument rentals for those who are down for short periods of time and want to jam out without having to lug around equipment. He rents amplifiers and microphones for emcee events as well.

The store is fun to stop in if only to see Bob’s collection of instruments from all over the world as well as posters and memorabilia of rockers such as Frank Zappa, Bob Marley, Jimmy Buffett and so on.

Bob also has a photo of one of his most interesting works displayed in the store. You’ll have to stop in to see it as it was designed for the 25th anniversary edition of Playboy magazine. Therefore, the photo is not acceptable for print in this publication. It is, however, simply beautiful. “I built the bass guitar as a tribute for their magazine. It’s taken from their first issue that Marilyn Monroe was in. She did these poses on red velvet, and that was one of the poses she did. So I took that and made it into a guitar. Playboy was thrilled about that,” Duffy casually explains. He later “made a deal” with bass player Andy Summers, of “The Police,” who currently owns the guitar.

For more information on all that Bob Duffy and Lee Brovitz have to offer through Show Your Axe, visit them at 1165 Bald Eagle Drive in Olde Marco or call them at (239) 642-0354. Visit their online eBay store or their website at showyour axe.com