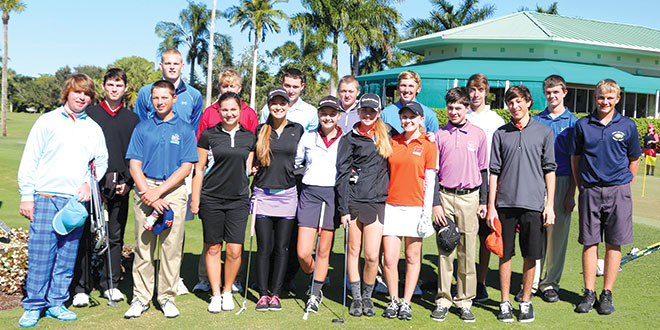 We ended up with a full field of 150 players, including one First Tee High School Golfer per team. SUBMITTED photo

The Island Country Club Charitable Foundation recently held its 13th Annual Golf Classic. This year, the ICCCF partnered with the American Cancer Society-Marco Island and the Hideaway Beach “Chips Away at Cancer” team to raise more than $75,000.

“(It) was by far our most successful event,” said Wes Blackwell, chairman of ICCCF. “We ended up with a full field of 150 players, including one First Tee High School Golfer per team. These kids are really the highlight of the day. They hit the ball a country mile and knock in 20 foot putts without a care in the world.”

New this year, the Island Country Club tennis members participated in a round robin tournament and raised almost $10,000 for charity. It was a big success, and plans already are in the works to do it again next year. At the end of the day, the golfers, tennis players and other club members celebrated with a Margaritaville party. The turnout was unbelievable, with nearly 300 people joining in the evening festivities.

In addition to the American Cancer Society, the money raised goes towards fulfilling grants from a number of local charitable organizations. Since 2000, ICCCF has been a beacon of hope and help for these groups, raising and donating more than $1.25 million over the last 10 years. Worthy recipients of these funds have included American Cancer Society, Marco Island Healthcare Center, Greater Marco Family YMCA, The Joy of Giving, Habitat for Humanity, Marco Island Charter Middle School and The Shelter for Abused Women and Children.

Blackwell was pleased with the event and its outsome: “All in all it was a wonderful day for the Island Country Club because ‘We believe Community Matters.’”