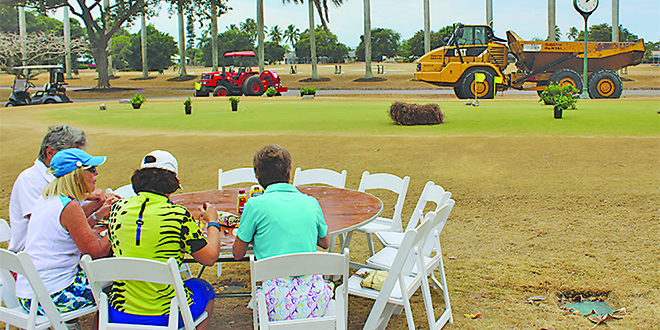 The Island Country Club (ICC) recently held a “Demolition Day” themed golf tournament event and BBQ to celebrate its upcoming golf course renovations. The ICC golf course will be closed from now until December 1, 2017 as it undergoes a complete modernization and refurbishment initiative.

Golf course architect Dave Wallace designed the original course over 50 years ago in 1966, making it one of the oldest greens in the Southwest Florida area. With the help of the “Squire” himself, Gene Sarazen, the course was redesigned in 1991. Again, in 2001, all 18 greens—including the chipping and practice greens were rebuilt. Throughout the years the golf course has been continually upgraded to maintain its elegance and practicality. Now in 2017 it will once again go under the knife, so to speak, under the direction of Kipp Schulties.

In a 12-month period, plans were put in place by Schulties and his team for the redevelopment of the course. Schulties explained that each hole was scrutinized extensively in order to address the “needs of all players.” Talk of a better irrigation system was a point of concern for the Greens and Grounds Committee members as well as the ICC members.

According to Schulties’ Golf Course Master Plan the renovations will include a subsurface drainage system as well as the removal of the 50-year-old organic layer under the fairway. This will elevate the lower parts of the course. They also plan on “rebuilding select greens as well as renovating those greens that have no issues, enlarging and leveling tees, rebuilding 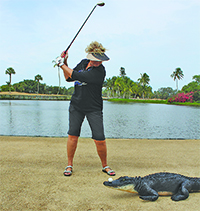 Photos by Samantha Husted | ICC member pretends to tee off of a fake alligator. The alligator was used as a realistic prop on the course as part of the demolition theme.

The day of the final golf tournament was overcast and humid with the early signs of spring. The grass on the course was brown, having been treated in preparation for the forthcoming renovations. Large construction machinery scattered the course as well as other props, enhancing the demolition day theme. Members made their way around the 18-holes, saying their final goodbyes for the summer and paying their respects to the greens. The mood was playful and fun as golfers teed off, side stepping fake alligators and other various props meant to distract.

After the tournament, members were treated to a BBQ lunch where they discussed their performances on the course, razzing one another and poking fun. Guitarist Steve Napp provided the music for the afternoon.

“The Demolition Day (D–Day) golf outing was a fitting tribute to the grand old course that has served the membership and community so very well for so many years,” said ICC General Manager and Chief Operating Officer Peter Cizdziel. “The excitement and fun of the event was a fitting tribute to the many years of entertainment the course has provided. Now the “tired” golf course undergoes a wonderful transition into one of the finest and certainly the newest renovated golf course in Southwest Florida. The excitement is already building amongst the members anticipating its unveiling in December! The very best of the Islands’ golf is yet to come!”

For more information on the Island Country Club check out www.island-countryclub.org or call 239-394-6661.