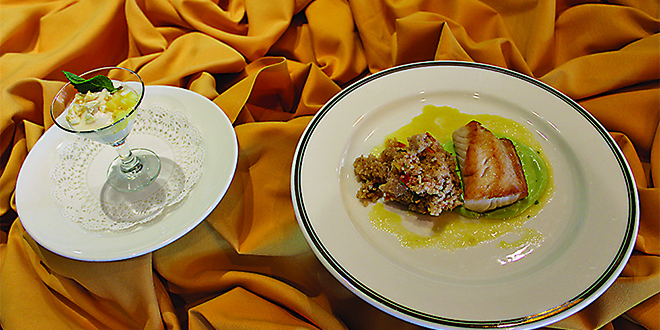 Photo by Samantha Husted | On the right is the pan seared sablefish with coconut and avocado puree, quinoa pilaf and acevichado sauce. And on the left is the piña colada sorbet.

The Island Country Club (ICC) recently held a cooking class presentation for its members and their guests. Fifty participants gathered in the club’s dining area for a lesson on how to cook a palatable three-course meal. After each dish was demonstrated, it was served to members with a wine accompaniment.

Executive Sous Chef to the ICC, Loren Cogswell led the class through the three simple, yet elegant recipes: an arugula salad, a pan-seared sablefish with acevichado sauce, and a piña colada sorbet dessert. Before he began the presentation, Chef Loren explained his cooking philosophy to the members.

“Less is more,” said Loren Cogswell. “If you have the proper ingredients and you treat them well, you don’t need to cover it up with a bunch of different spices and flavors.”

With that in mind, he got to work. He began with the arugula salad, adorned with marinated baby heirloom tomatoes, a goat cheese mousse and a light dressing. It’s a simple, easy to make salad that’s packed with great flavors. The spicy, peppery taste of the arugula combined with the creamy, sweet goat cheese mousse and the juicy tomatoes allow for a really fresh and interesting dish. And it looked pretty too.

“In essence it’s arugula, tomatoes and goat cheese. And with those three ingredients, they can complement each other well. It turns into a really nice, full, complete rounded dish,” said Loren Cogswell.

The next item on the menu was the pan-seared sablefish with coconut and avocado puree, quinoa pilaf and acevichado sauce. Sounds fancy, right? While this recipe is more nuanced than the arugula salad, it’s pretty simple to follow. So don’t get too caught up on its intimidating name.

The recipe, Loren explained, has some pleasant Peruvian flavors and influences. It’s similar to a ceviche, a popular Peruvian dish, where raw fish is marinated in citrus and then served.

“We’re basically making a ceviche sauce,” said Loren Cogswell. “It will be essentially the same ingredients of a ceviche, but instead of marinating raw fish we’re going to cook fish and use the sauce warm as a dressing.”

The oily sablefish was topped with the acidic lemon, lime acevichado sauce and served over the avocado coconut puree, which added a sweet, creamy element to the dish. The acevichado sauce was tart and citrusy which paired well with the fish. And quinoa, which is a grain native to Peru, offered a healthy, gluten-free side.

If sablefish isn’t your thing, Loren explained that you could always substitute it for a halibut, a Spanish mackerel, or a cobia instead. An oily fish would do best with this recipe.

Finally, for dessert Loren made a refreshing piña colada sorbet made with Coco Lopez Cream, pineapple juice and rum.

“Don’t be afraid to follow your instincts,” said Loren Cogswell. “If you think you need a little more of this or just a little bit less of that, go for it.”

For the Coconut and Avocado Puree: Combine the avocado, coconut milk, and lime juice in a blender. Blend until smooth. Adjust consistency with more coconut milk and adjust seasoning with lime juice, salt and pepper.

Quinoa Pilaf: Sautee the onion and bell pepper with a few tablespoons of oil in a pot until softened. Add the quinoa and stir to coat with oil. Add the chicken stock (or water) and bring to a simmer. Once simmering cover and reduce to low heat. Cook for about 15 minutes or until the liquid is absorbed. Uncover the quinoa and stir in the tomato, cilantro, and a little extra virgin olive oil. Taste and adjust seasoning with salt and pepper.

Sablefish: Heat a non-stick or cast iron pan over medium high. Add a few tablespoons of oil and sear the sablefish until golden brown. Flip and sear the other side for a minute or two. If the fish is thin it will finish cooking in the pan. If the fish is thick, remove it and place it in an ovenproof ban and bake at 425 until cooked through at about 125 degrees. Spoon some coconut avocado puree onto a plate. Place the sable fish on the puree and drizzle with acevichado dressing (recipe below), serve with quinoa pilaf on the side.

Place first 6 ingredients in a blender and blend until smooth. With the blender running on low, slowly drizzle in the canola and olive oils and blend until emulsified. Season to taste with salt and pepper. Stir in cilantro.