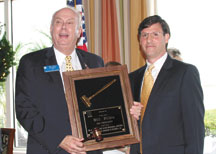 “Déjà vu,” Gerry began. “I accept this position with my eyes wide open and I take it very seriously. We have over 500 members who rely on us….as a practicing realtor I know how important our services are.” Gerry’s interest is in the betterment of all realtors on Marco Island.

Outgoing President, Bill Filbin, thanked Shirley English-Chief Executive Officer, Pattie Ziesig-MLS and Membership Director, Linda Johns-Administrative Assistant, Kandy Sweeney-Communications Director and Faith Eielson-Executive Assistant for making him look good throughout the year and keeping him organized. Bill quoted market indicators such as sales up 23.6% over last year, a 5.02% drop in days on the market and the most important statistic: inventory dropped 13.8% and continues to shrink. “I am most impressed by the hearts of our members, giving back to the community. As an example, we just delivered 29 large trays of hot food to St. Matthew’s House homeless shelter, collected donations for the Paws for Patriots program placing service dogs with veterans who need assistance and the association was interviewed by CNN Money and featured in Where to Retire magazine. Bill says he is honored, humbled and learned a lot during the year.

County Commissioner, Donna Fiala, spoke to the audience commenting on projects in the district “catching fire”:

• Treviso Bay recently purchased by Lennar Homes. It will be maintained as an upscale community.

• Sabal Bay at 41 and Thomassen Drive, originally designed as a golfing community, now slated to become a walking, hiking and biking community with 2000+ acres. More lakes are to be added.

• Hacienda Lakes has just been approved, a community of over 2000 acres on 951, wrapping around the “Swamp Buggy” area. Planned are 1,731 homes with 325,000 sq. ft. of retail space, as well as a preservation area at the rear of the property.

• Naples Reserve on US 41 near Reflection Lakes.

• Affiliate of the Year went to Ron Webster.

• Realtor of the Year was awarded to Susan Ackerson.