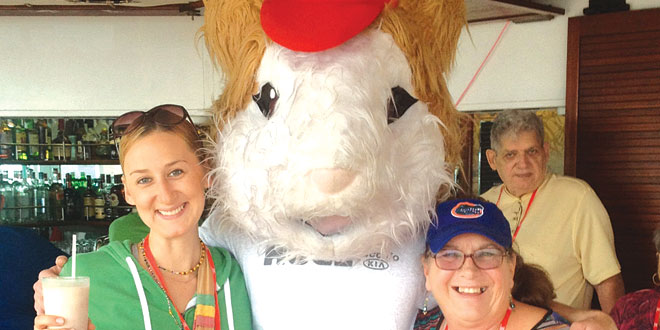 “Now remember Duffy, what happens on the ship stays on the ship,” I said as we boarded the Royal Caribbean’s Majesty of the Sea cruise ship in Miami.

We stuck to that story, but upon my return I remembered the promise I made to my readers in the previous edition – a full breakdown on the “Cruise With Huge” courtesy of the Fucillo KIA car dealership in Cape Coral. Duffy bought a KIA from the dealership, and she got a free cruise, a strawberry pie and a $1,000 shopping spree. (Wait to hear about the spree in the next edition of Coastal Breeze News.) I was graciously invited to go on the cruise as I helped her purchase the car.

Now, as a thank you to her, I will break the pact I made with her at the start and tell you all about our adventure.

Honestly… it was HUGE! We could easily pick out our cruise ship from the parking garage at the Port of Miami as there was a huge (sorry) 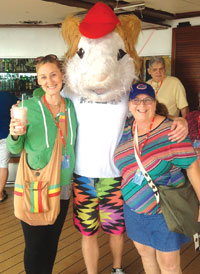 Me, my first drink, the hamster and Duffy.

red banner hanging from the side of the boat reading “Fucillo KIA #1 Dealership in the World.” Entering our stateroom, we were greeted with KIA backpacks, cups, chapstick, lotion and spf. Three days later we entered the room to find free t-shirts and matching hats on our beds that read “Cruise With Huge.”

Our stateroom was small but clean, and the beds were extremely comfortable. Also, believe it or not, the shower was bigger than the one in my own house! But then again I live in a cottage built in the 1920’s; I suppose I’m lucky to have a shower at all.

But I digress… Our first stop was to the pool area of course. As we made our way through the ship’s main lobby we saw Billy and his commercial sidekick Caroline. Suddenly Billy shouted, “It’s the girls from Goodland! I was just talking about you!” He told us he was telling his friends about us just a few days prior and he couldn’t remember the name of our village. One of the friends told 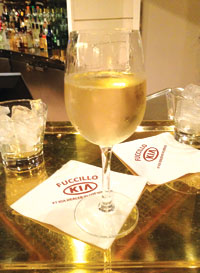 Even the bar napkins were made specifically for the KIA cruise. PHOTOS BY NATALIE STROM

This really surprised me considering how huge (again, sorry) his car dealership is. Not to mention that he owns a KIA dealership or two in New York as well. We found this out because half of the people on the cruise had bought a KIA from him in New York. Not only did they get the cruise, but the person purchasing the car received a free plane ticket to get there.

We made our way to the pool and went directly to the bar. I ordered the most annoying drink in the world – a Miami Vice. Half pina colada and half strawberry daiquiri; it was the perfect way to kick off a tropical cruise. We turned around to find a guy wearing a giant hamster head; we took pictures with him. Many may recall the KIA commercials featuring hamsters driving around town in the company’s cars. So far it was just fabulous!

The pool area was huge and extremely busy, so we explored the ship, finding our 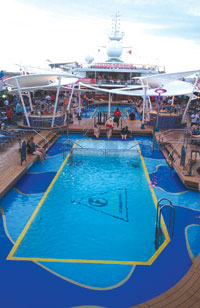 The HUGE pool area. Belly flop contests, melon carving demos and giant jenga games were just a few of the activities that went on here.

favorite places: the Schooner Bar & Lounge and the casino. We spent most of the evening hours at these two places. Sitting down at the Schooner, we were greeted by John and Patty, the bartenders. They were really fun and entertaining – very good at their jobs. As John handed me my second drink of the day – another Miami Vice – he placed it on a bar napkin that once again read “Fucillo KIA, #1 Car Dealership in the World.”

Billy really pulled out all the stops. Fucillo banners were hung in the pool area and a Fucillo emblem was even embedded into the felt at my favorite spot – the roulette table. All that felt was changed just for the cruise. I was just blown away by it, but I didn’t let it affect my gambling skills. When it comes to gambling I am a “slow and steady wins the race” kind of gal. Over three nights, using the same $20 I made $179. 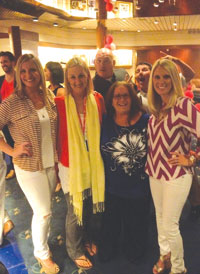 Photo bomb by the camera crew as Duffy and I take a photo with Caroline and Abby.

spa. It was well worth it.

We stopped in Nassau and Cococay in the Bahamas, and Key West. My favorite of the three was Key West, which is kind of silly since I’ve been there before. Nassau was very loud and confusing, but the brightly colored buildings were beautiful. Cococay is a private island owned by Royal Caribbean, where the entire island is run by Royal Caribbean staff. You could buy drinks, food, wave runner rides and more simply using your ship pass (a little credit card that tracks all your spending). To be honest, though, I didn’t go to Cococay. I stayed on the ship. The reason will remain a secret.

Billy, Caroline and Abby (the new girl in the KIA commercials) spent time with everyone on the ship – taking pictures, chatting and laughing with everyone. Billy bought Duffy and me drinks every time we saw him. The camera crew was friendly too. Billy, Caroline and Abby made numerous commercials on the ship and included many of the people onboard.

Jim and Marva Sutt of Marco Island film a commercial with Billy and Caroline. SUBMITTED photo

Sutt were one such couple. Duffy and I ran into the couple early on, and we had a great time together, laughing at how you really can’t go anywhere without running into someone you know from Marco. The four of us agreed: what happens on the ship stays on the ship. So I suppose I’m breaking my promise to them too!

I would guess that about 90 percent of those on the ship were ecstatic to be aboard. Many that we spoke to said they never would have been able to go on a cruise if it weren’t for Billy and his KIA dealerships. It’s true. I’m one of those people, and I am extremely grateful as well.

Billy was a regular, fun man who made time for everyone. The only time he yelled “HUGE!” was during commercial filming, and no one on the boat incessantly yelled “HUGE!” either. But I tell you what, I will never be able to use that word without thinking of Billy. It’s not a bad thing though, because I personally think he’s kind, genuine and generous. And that, my friends, is HUGE!