Hugo: a blend of fact and fiction 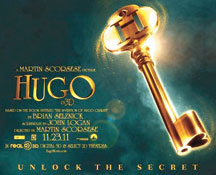 “Hugo” is a charming mixture of the real Georges Melies, a French film pioneer, and Hugo Cabret, a 12 year old boy who lives in the Gare Montparnesse in Paris, and is a combination orphan, station clock minder, and part-time petty thief. The film is based on Brian Selznick’s 526 page book “The Invention of Hugo Cabret.

In 3-D, the colorful and beautifully conceived and acted movie intertwines the stories of Hugo’s search for family after his beloved father’s sudden death in a fire; and the search of Georges Melies for his past life.

Hugo lived with his father in the train station where they tended the huge number of station clocks while working on the restoration of a small automaton (robot) that is designed to write messages. After his father’s death, Hugo took over the clocks and dodged his alcoholic uncle and the station inspector, whose main occupation appeared to be cleansing the station of orphans.

Georges, a dour old grandfather, runs a small booth at the station. He was a successful magician who turned to film-making in the 1890’s, and continued into the 1920’s. In the movie only one of Georges’ numerous films (“A Trip to the Moon”) has been found intact, and the quest for other of his pioneer films is pursued by a professor. “A Trip to the Moon” may be seen on You Tube.

Hugo is intent on completing the restoration of the automaton and deciphering the meaning of a cryptic drawing, retrieving a stolen notebook and finding a mysterious key. Isabelle, Georges’ granddaughter, provides answers to part of the puzzle.

The scenes of Paris, digitized and drawn imaginatively, are dazzling. The station scenes are intriguing, and the 3-D enhances the action of an otherwise casual film. What really creates the enchantment is a brilliant cast: Ben Kingsley is an impeccable Georges; young Asa Butterfield is a blue-eyed charmer as Hugo; Chloe Moretz plays Isabelle beautifully; and Sacha

Baron Cohen is a terrific surprise as the station inspector.

Film history is at the core of the movie, and it is enhanced by clips of Charlie Chaplin, Harold Lloyd and Buster Keaton, masters of movie comedy. Hugo reprises the famous Harold Lloyd clock scene when he escapes the fevered pursuit of the station inspector and his vigilant Doberman.

Although the movie starts as a children’s story it morphs into much more as Georges and Hugo search for their past and present.