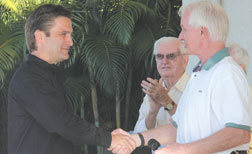 On January 24, at MICA’s Annual Social Vice President Jim Johnson presented MICA’s 2012 Humanitarian of the Year Award to Mr. Howard Jordan. Johnson noted that “Howard Jordan has spent countless hours working on behalf of the residents of Marco Island, big and small!” He was honored for his 11 years of service on the MICA Board of Directors, his sports coaching efforts, and for the formation of the “Upon a Star Foundation.”

The MICA Humanitarian of the Year Award was first presented in 1998 and has become one of the most prestigious awards on Marco Island. It honors the unsung heroes of our island, the people who do so much for so many. Past recipients include Mimi Torbush, Shirlee and Brian Barcic, Ward Bradeen, D’Ann and David Brandt, Dr. Sam and Mary Ann Durso, Judy Barney, Arturo Perez, Maury Dailey, Art Segal, Stevi Walthour, Luise Romano, Jane Williams, Karen Saeks, Nicki Davis, Jann Brewer and Maria Elena Pujol.

Johnson continued that Howard “has a strong sense of service, preferring to work behind the scenes, wishing to remain anonymous in most cases.” Jordan founded the Upon a Star Foundation in 2007 after kids from the neighborhood, who were eight and three at the time, knocked on the Jordan’s door one evening and asked if they had anything they could eat. It turned out their mom, a single parent, was working her usual 60-70 hours per week, and the family was going through a tough time. It also turned out to be the three year old boy’s birthday. Howard and his wife, Michelle, quickly wrapped a toy and whipped up a birthday cake.

The smile on the boy’s face was a turning point for Howard. As Howard says, “There’s a misconception that if your zip code is 34145 you have unlimited financial resources. Not true.”

After forming “Upon a Star,” Howard quickly learned to move around the dance floor when he participated in “Dancing with the Starz” in order to raise funds for the charity. Upon a Star provides financial assistance so kids may participate in different programs such as Youth Sports, Swim Lessons, Parent-Child programs, Summer Camps, Music and Arts, where it would not otherwise be possible due to financial constraints. For the past several years Upon a Star Foundation has hosted a fundraiser that coincides with the Kentucky Derby and which is cleverly named, Talk Derby to Me. This event has become so popular that last year they raised $28,000 in one afternoon!

Quietly working behind the scenes for 11 years on the MICA Board of Directors, Howard served and worked on behalf of the property owners of the island. In addition to hosting a financial advice television program, Howard has coached many children of Marco on various sports teams.