How We Got to Goodland 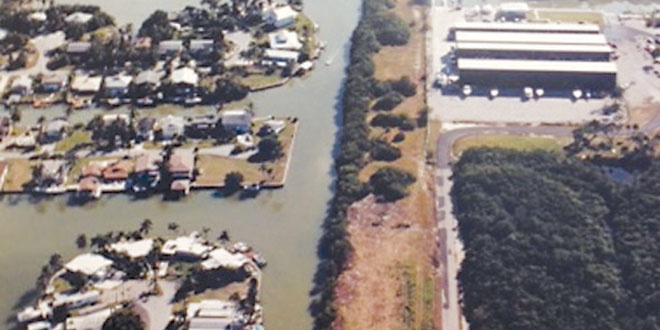 Everyone has a story about how they ended up in Goodland. Many, like Nancy and I had never heard of Goodland or knew where it was. Our story begins back in 1993. That was the year that my company sprung for a retirement seminar at the Peabody Hotel in Orlando. The three day seminar was for the benefit of those of us in the Philadelphia Office who were facing retirement. When I discovered that no attendance was being taken, we started touring Florida instead. When the seminar was over, we decided to stay for a few days and visit the Keys. After the Keys, it was across the Tamiami Trail to the west coast. We wanted to make a stop on Sanibel Island to get a taste of the living there. I mapped out a trip which would take us on a detour through Marco Island, which our neighbors had recommended. We came in San Marco Road; took a right on Barfield Dr.; and then right on Collier Blvd. to return to the Tamiami Trail. It was Barfield Dr. that got to me. It was filled with nicely kept homes, most of which were waterfront. They had their own private docks out back. A couple of them had medium sized sail boats. I was an avid sailor, and this made a lasting impression on me.

Although I retired from the FBI in 1995, any thoughts of moving to Florida were soon out of mind. Upon retirement, Nancy and I had opened up a consulting business and we were soon swamped with work. This business proved challenging and profitable. It required a lot of travel the in states of PA, DE, NJ, MD, VA, WV and DC.

Recent aerial view of Calusa Island Village Condos. My building is sixth from the top. Notice how the marina has also expanded.

My wife ran the office, and with some of the profits, we were able to buy a condo on the beach, in Brigantine, NJ. We operated the business out of our home and loved where we lived. Swarthmore is a leafy suburban Philadelphia college town. I had grown up less than a block from where we lived. It was a good life until 2004, when my wife started experiencing symptoms which began to slow her down. She mentioned that it was time to start looking for a retirement place in FL. She has a way of casually mentioning something that really gets my attention. In April 2004, after stalling as long as I could, and remembering Barfield Dr., I bought street maps for every west coast city up to Sarasota and we booked a flight to Ft. Myers. The intention was to start in Marco Island and work our way up the coast until we found something we liked. We gave ourselves three days to accomplish this. And so it was that we found ourselves crossing the Jolley Bridge into Marco Island.

Our first stop was at the Visitors’ Center. Here we expected to be welcomed warmly and given some information on the availability of homes and a list of realtors. Instead, we got the equivalent of a pail of cold water. We were told that homes were sold almost as soon as they were listed – some for the asking price, but many for a good deal more. They said, “to look around for ‘for sale’ signs, look the property over, and then call the realtor as quickly as possible”. We were told that, “Realtors were not even bothering to show the properties anymore.” It was suggested that 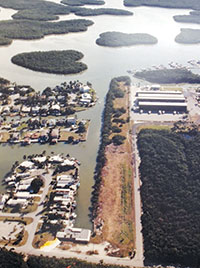 we might be better off buying a condo and we did get the addresses of some they thought we could afford. Waterfront residences on Marco Island were way out of our price range, so we started looking at condos.

The last two condos we looked at were at the Estuary and Stevens Landing. The best we could do there was a two bedroom condo at the Estuary overlooking the parking lot. They were asking $350,000. We heard there was another condo going up at the foot of the Goodland Bridge and we meandered down San Marco Road to the site. There was a sales office and a sign, but no one was there. Across San Marco Road, was a winding road that disappeared into the mangrove forest. Before heading back to our Ft. Myers hotel, our curiosity took us down this road. Where it ended, turned out to be the end of the line for us.

On the way in to Goodland, we noticed a sales trailer to the right offering preconstruction sales of condo units. We thought we’d take a look at the village first. There wasn’t much for sale in Goodland, but we did come upon one for sale sign, which looked, uh, interesting. It was on a weed choked lot with a dock. Trouble was, it contained an old rundown single wide mobile home. This seemed to be something we could at least afford. A call to the listing realtor resulted in a larger bucket of cold water coming our way. The asking price for this eyesore (It has since been fixed up.) was $750,000. We were going to have to continue our search the next day, further up the coast. Venice was starting to sound good.

Our Goodland home and sailboat.

We couldn’t afford to buy on Marco Island or even in Goodland – not in the boom year 2004.

On the way out of Goodland, the sales trailer again caught our attention. We pulled over and went in. Here we were welcomed warmly and walked right into an efficient, informative sales operation, being run by Gerry Rosenblum. Rosenblum later became a two term president of the Marco Island Realtors Association and a valued friend of mine. We learned that all sales were preconstruction, for units to be built on a strip of land across the western most canal in Goodland. The units would not be completed before March 2006. There three models available – The Abaco, 2 BRs at $490,000, the Aruba, 3BRs at $510,000 and the Bimini, 4BRs at $540,000. We later learned that a few months before this, they were starting at less than $400,000. At any rate prices were about to just increase again and the units were 75% sold out. A day later they did increase to $510,000 to $570,000.

We liked the Aruba unit which included an extra room I could use for my office. The plan was to continue my consulting business down here. Since each unit was guaranteed 34 feet of dock space, I would be able to dock my sail boat right behind the house. The developer was Bob Reed, who had successfully developed similar properties before. The builder was Boren, Craig, Barber and Engle, one of the largest and most reputable in the area. Since we hadn’t intended to move down for another couple of years, the two year wait fit right into our plans. Given the buying frenzy then gripping the island and the imminent price increase, we signed on

Our Swarthmore home – left behind.

Normally, $510,000 would have been out of our price range. These were not normal times however. Although we were paying record high prices in Florida, we hoped to get record high sales prices for our home in Swarthmore, PA and our beach condo at Brigantine, NJ. This is what in fact happened. In 2006, at the height of the real estate bubble, Our PA and NJ properties had almost tripled in value. It was all monopoly money. We never saw most of it, because the bank simply transferred the money from those sales to the developer’s account down here. We moved here in May 2006. After learning that a unit had just sold for $775,000, I felt we had made a pretty good deal. The real estate bubble burst with a loud pop shortly after this.

After successfully reserving a unit, we wanted to celebrate – in Goodland. For no particular reason, we picked the Little Bar. We were to have many more dinners there. While enjoying the sea food, I started getting hooked on Goodland. Pelicans were sitting on the pilings and gliding through the air. A fishing fleet was docked next door. Palm trees swayed in the breeze behind the picturesque water front dwellings, each with its own fishing skiff docked out back. I started to get an inkling that when we moved down here in two years, I would be coming home.