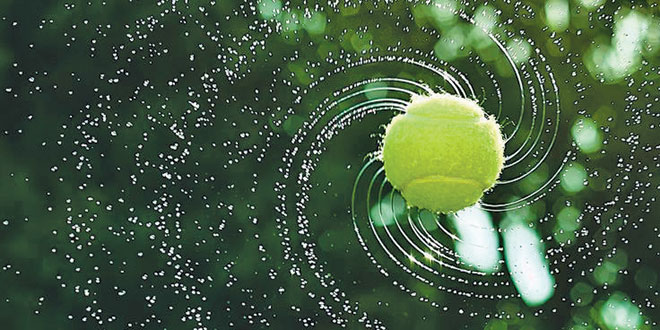 In today’s world of professional tennis, with all of the big topspin forehands and two-handed backhands, players don’t just hit the ball hard, they hit it heavy! By heavy, I mean that they hit the ball with a lot of spin. Through the utilization of high tech photography, it has been measured, that the men on the Pro Tour spin the ball an average of 3,200 revolutions from contact to contact and have been tracked at over 4,000!

The majority of adult players in our area compete at a 3.0/3.5 level of play and even though they don’t necessarily apply large amounts of spin to the ball, the fact remains that every time we strike the ball, we apply some type and amount of spin on the ball.

I have watched the sport of tennis advance from wood racquets with natural gut string, to today’s modern composite materials, with hybrid poly filament strings. My original belief has been that with the evolution of string and racquet technology, which now allows players of all levels to impart much more spin on the ball than they could, say ten years ago, that this would make the game of tennis even more of nothing but a big power topspin style game than it already is.

However, while in today’s game, on a professional level, the ball is hit with heavier spin than ever before. I am beginning to see, that because of the amount of spin players can now apply to the ball, it is allowing them to also be able to use heavy amounts of underspin, which as with topspin, gives them an extreme amount of control with the placement of their shots.

Along with this control and placement, the heavy amount of underspin, which is applied to the ball, keeps the ball low on its bounce. Because of this lower bounce, the ball does not come up as high off of the court and up into the other player’s power/topspin strike zone. Also, a sliced ball travels slower than a ball hit with topspin. The combination of lack of energy on the ball along with its lower contact point, somewhat neutralizes the opposing player and prevents them from being able to apply an extreme amount of power and topspin on the ball.

I am finding it surprisingly refreshing that because of the fact that the players now have the ability to spin the ball as heavy as they do, that it is actually transcending the game to more of a style of play which includes a variety of spins, flight paths and placement of the ball, instead of just utilizing what I jokingly refer to as the Nick Bollettieri theory of tennis, which is “Hit the ball as hard as I can and if it comes back over the net, hit it harder the next time.”

As a fan of watching tennis on a professional level of play on TV, I believe that there is a direct relation in regards to the use of so much spin, and how it is affecting the strategies and choice of shots the pros are now making during rallies. The amount of spin they can now put on the ball is allowing them to create angles and open up the court in ways that was unimaginable just a few years ago. Along with this, the utilization of these strategies are requiring the players to now have to be faster and quicker than ever before. All combined, it is actually making the sport more fun to watch!

As an instructor, for the recreational/club level player, I see the ability to be able to put more spin on the ball as game improvement technology; Basically, because the more spin a player can apply to the ball, the more control a player has over the direction and placement of the shot.

So is the slice backhand a shot that is returning to the strategic realm of professional tennis and changing the way the game is played? Only time will tell. But, I feel that spin has made tennis more fun to watch than ever before.

Thanks to the use of modern camera technologies like slow motion replay and shot-spot, along with visual graphics, which can show things such as the location of the ball landing in the service box and the position at point of contact of the ball by each player for every point of an entire match, as well as fantastic job done by the commentators, the sport of tennis is both informative and entertaining to watch.