House of Mozart: a good meal is balm for the soul 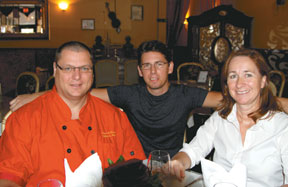 Robert, Thomas and Gaby are ready with a warm welcome. PHOTOS BY VAL SIMON/COASTAL BREEZE NEWS

Robert and Gaby Hofbauer visited Southwest Florida while on their honeymoon. Like many young couples, they started making plans for their future. Finding Naples and Marco Island intriguing, their long range goal was to return someday. 22 years later, they returned to this paradise and recently bought the House of Mozart. The restaurant has been a fixture on the island dining scene for many years.

From Vienna, Austria, Robert had trained as a gourmet chef since he was 15 years old. Even before his apprenticeship began, Robert watched his grandmother cook in her restaurant as a young child. His whole life has centered around the kitchen. Once his talents were proven at the highest level, Robert was assigned to the Schwarzenberg Castle. The castle was an historic and 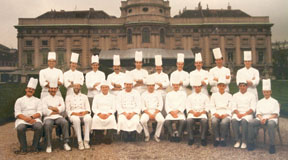 Chefs at the Schwarzenberg Castle.

sovereign landmark with an unmatched culinary crew. There he created masterful meals for the many important dignitaries, aristocrats and celebrities that visited the castle in all its glory. It was at Schwarzenberg that Robert met Gaby through a friend who was also a chef at the castle.

During the off season, Robert gave lectures and taught cooking classes; cooking for diabetics, cooking for those with allergies or on restricted diets, they were all in his repertoire. He featured nutritious, healthy meals, low in calories and fat but meals that were satisfying. One of his favorites featured the ‘lost skills’ of cooking. Programs he might consider doing here on Marco in the future. 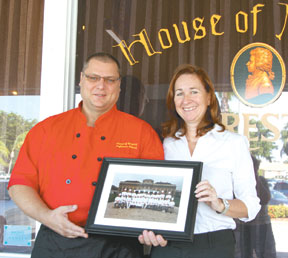 Robert and Gaby, new owners of House of Mozart.

Austrian-German recipes. Thomas Poremba, their cousin, also experienced in the culinary arts, has joined them stateside to help them make their new venture with House of Mozart a success.

The standard menu at Mozart’s will be redesigned with the exception of some customer favorites. Delectable Austrian and German specialties, like Wienerschnitzel and Sauerbraten will remain. Original Vienna crepes with apricot jam, vanilla and chocolate sauce and ice cream, is available for dessert. Or how about a mouthwatering Kaiserschmarren? Robert describes it as a fluffy, scrambled pancake dessert with raisins, applesauce, caramelized sugar, a delightful dessert. Sounds simply scrumptious!