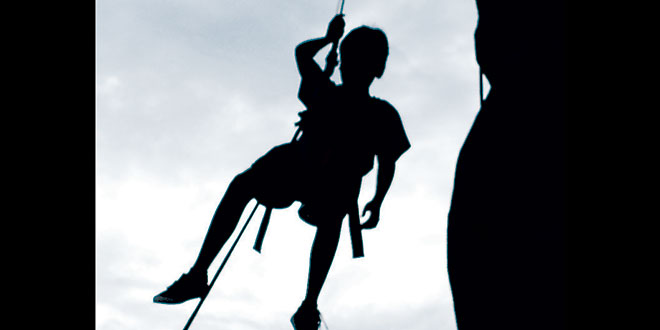 Alejandro Ruiz-Vallejo would not be denied when it came to summiting the rock-climbing wall erected on Mackle Park’s lawn.

The sure-footed 9 year old was slow, but steady in his technique, carefully moved upward, making sure each foot-and-hand-hold was secure, as onlookers oohed, awed and shouted encouragement.

Upon reaching the top, Alejandro, protected by a harness and safety ropes, was lowered to the ground by deputies from the Collier County Sheriff’s Office, which brought the climbing wall and other attractions to Mackle as part of the agency’s annual Hot Summer Nights festivals.

Also known as Summer Fest, the free events are held on eight consecutive Friday evenings at eight different community parks around the county. Aside from the climbing wall, the activities include music, karaoke, Wii, a movie station, a police car bounce house, hotdogs, popcorn, drinks and more.

Sheriff’s Office deputies are there to chat with residents, staff the attractions, play games with children, and even make the popcorn and pass out drinks. On Marco, they were joined by police chief Al Schettino and members of 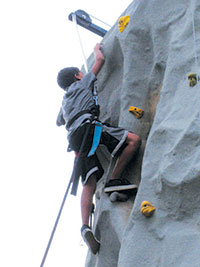 Held on July 17, this was the third year that the seven year-old Hot Summer Nights was held on Marco.

“The main reason is we do this is to promote positive relationships with the community, said Capt. Beth Jones, of the Sheriff’s Office. “One of the ways that we do that is by taking Hot Summer Nights to various community parks in the county and just asking residents to come out to the park and have a good time.”

The rock-climbing wall was a popular attraction with Alejandro and the many other children who eagerly took a turn at scaling the towering barrier.

“It was really fun,” said Alejandro, of Marco Island. “It was scary, but it was more hard than scary. When you get in the middle, it gets really scary. You feel like you’re just about going to fall.”

Adam Campkin and his son Brady, 7, of Marco, were drawn to the human foosball arena, a new addition to Hot Summer Nights, which began seven years ago. “He goes to camp at

Mackle and he saw them setting up, so we had to come back for it,” said Campkin.

He praised the Sheriff’s Office for its outreach efforts.

“It’s good,” said Campkin. “It’s nice to see them all out here, spending time with the kids. It’s good for the kids to get to know them and it’s a lot of fun.”

Angela Zunzunegui of Lely Resort came with her daughter Katelyn, 6 and son Jackson, 7, who were entertaining themselves with a game of tetherball as their mother looked on.

It was their first time attending the event.

“I think it’s great, said Zunzunegui. “It gets the kids outside and it gets them exercising, and it gets them interacting with the police and learning that they’re friendly people, not scary people. The exposure to them is great.”

Jones said she was happy with the turnout.