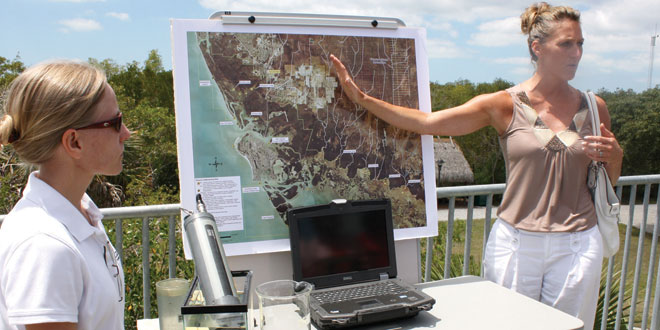 In honor of the Second Annual National Everglades Day, April 6th, Rookery Bay National Estuarine Research Reserve (RBNERR) was ready to throw a party. Just last year the date was chosen as it is the birthday of Marjorie Stoneman Douglas, a champion of the Everglades, known best for her book, “The Everglades: River of Grass.” She was at the forefront of the fight towards redefining the Everglades as a treasured river rather than a useless swamp.

Much has been learned about “The River of Grass” since Douglas wrote the book in 1947, but the devastation to the Everglades had already begun. As people are beginning to understand the need for proper water flow throughout the Everglades and Florida as a whole, steps are constantly being taken to protect what is left of the anything but useless swamp.

It can be assumed that what took place at RBNERR on the Second Annual National Everglades Day would have certainly pleased Ms. Douglas. The public celebration that had been initially planned turned into an intimate gathering of some of the most influential law makers and heads of state and conservation societies along with a number of concerned citizens. All 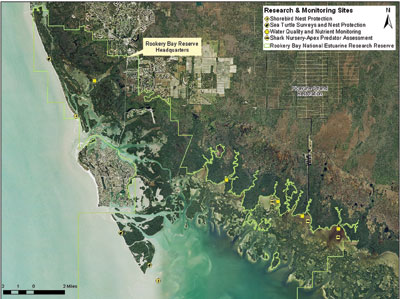 The Picayune Strand – once slated to be Golden Gate Estates East – is visible in the top right where canals in grid shape are easilyidentifiable. This is the area that will be reclaimed to wilderness and should help maintain regular salinity in nearby estuaries.

were there to not only recognize the special day, but to discuss the restoration of the Everglades, especially the Southwest portion.

Among the guest speakers of the day were Gary Lytton, Director of RBNERR, Florida Congressman Mario Diaz-Balart of District 25, Zach Zampella, Regional Director for Senator Marco Rubio, Collier County Commissioner Donna Fiala of District 1, Lisa Koehler, Administrator for the Big Cypress Basin, SFWMD, Brad Cornell of the Audubon of Florida and Captain Will Geraghty, a charter fisherman in Naples.

Brad Cornell led the day, introducing speakers such as Donna Fiala who Cornell described as, “one of the first leaders in Collier County to recognize the importance of participating in the Gulf Restore Act.”

Ms. Fiala briefly spoke on her memories, recalling Rookery Bay when her children were young; bringing them out to see the birds and the habitat. “Of course it looks much different today, but this is a very special place for me,” she stated.

development never took place. Since the 1960’s the land has been forever altered, misdirecting the natural flow of water through the Everglades. Lisa discussed a number of other projects in the works for the Big Cypress Basin, all which would consist of redirecting to balance the salinity of the many bays within our areas.

To understand more of the science behind the question of the importance of managing where and how fresh meets salt water in the area was Water Quality Program Manager Christina Panko Graff of RBNERR. After the speeches, all made their way out to the boardwalk where Panko Graff gave a demonstration on water salinity.

“One of our main research projects is to study how canals and other water control structures that have been put in place due to urban development have effected the amount of freshwater that comes into our estuaries as well as when it comes into the estuaries. Because estuaries are where fresh and salt water meet, we can study this question pretty easily by monitoring how salty is the estuary.”

Using equipment that collects real-time data, RBNERR monitors a number of its estuarine bays to attempt to understand how and where the fresh water needs to

“What our research has found is that in this Picayune Strand area and sort of below it, we have found sort of a “Goldilocks” effect where in this estuary here it’s getting too much fresh water at the wrong time, where this one is not getting enough at all, but this one here is ‘just right,’” explained Panko Graff, pointing to the specific locations on the map.

The Picayune Strand project should effect water flow to the areas Panko Graff explained which means that, “our data is going to be critical in determining the success of this large-scale restoration project.”

This one project alone demonstrates the necessity for the local, state and federal governments, private organizations, companies, land managers and fisheries to come together and work as one for the sake of the Everglades. The Picayune, the estuaries, the sawgrass, mangrove trees and big cypress knees are all a part of a master plan that once flowed and moved together.

And on April 6th, National Everglades Day, the thought and spirit of saving the Glades was alive, flowing between the people in the room like a tidal surge, giving hope to the thought that this once perfect treasure, now so damaged, may one day be healthy again.