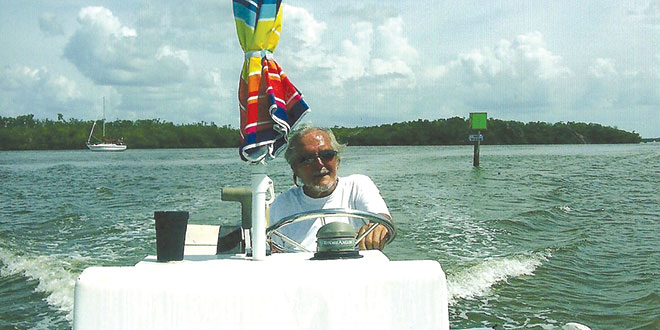 Let me start by saying, this has been the most enlightening, yet hardest thing I’ve ever written. To try and capture in words, what this legend of a man has meant to everyone he’s loved and everyone who loves him, is almost impossible. Please take into consideration the fact that I never had the honor and pleasure of meeting Butch Cameron. Through talking to as many of you as I could, and attending his memorial, I feel like I almost know him by proxy, and thus I will try to honor him here in my Goodland Life column.

Butch’s wife, Nadine Cameron said that he would tell her, “If I die today, I’ve lived a full enough life.”

When someone is loved so much and makes such an impact on a small community like Goodland, it’s hard to fill the hole they leave behind, but it’s comforting to know he felt that way.

The people I talked to (my apologies for 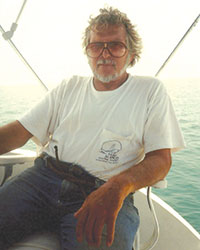 Fishing and being on the water were two of his favorite things.

not mentioning everyone, but that would fill more space than I’m allowed), had similar things to tell me about Butch. He was always smiling. He loved life, the outdoors, hunting, fishing and his family. He was like a father to so many of the boys growing up here, teaching them to hunt and fish. He thought the world of his grandchildren; and he helped people that no one else would help.

No one was ready to let him go, and he will be missed by so many:

“When he came over here, he found a home. He was hooked. He never wanted to go back and would do anything just to stay here.” – Kenneth Cameron

“He was a great dad. He made sure I could come to see him every weekend. He was a hard worker and would teach anyone who wanted to learn how to fish.” – Greg Cameron

“Butch had a lot of great friends and he loved the water. 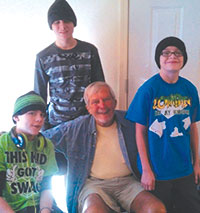 This was his home.” – Tim Duffy

“He was my mentor. I thought I knew a lot about life until I met him.” – Kurt Beattie

“He was the most wonderful man I’ve ever met. If I had met him when I was 20 years old, I would have married him then and spent the rest of my life with him.” – Nadine Cameron

“Butch was always the first one out, and would catch the most crabs. He loved life.” – Nicolette Bauer

“He was an avid fisherman and hunter. That‘s all he ever wanted to do and that‘s what he did.” – Damas Kirk

“Butch was a very private person, but he would give you the shirt off of his back, if you deserved it.” – Jimmy Brooks

Clyde Stuart “Butch” Cameron was born August 14, 1943 in Turtle Creek, PA. He first visited Goodland with his brother, Kenneth Cameron, in 1951. After living in Miami and working as a plumber, he relocated to

Goodland in 1974 where he worked as a fishing guide for a few years. He began stone crabbing for Capri Fishery before putting together his own boat, the Crabber Grabber. He bought his second boat, the Crabby Lady in 1979 and quickly gained a reputation as one of the hardest working crabbers around.

He and his second wife, Jo Cameron, opened the Crabby Lady restaurant, now Marker 8.5, in 1995. He married his third wife, Nadine Cameron in 2012.

Butch died January 20 after a six-year fight with a heart condition.

He is survived by his wife, Nadine Cameron; his son, Gregory Cameron; his brother Kenneth Cameron; and his three grandchildren Alex, James and Trevor.