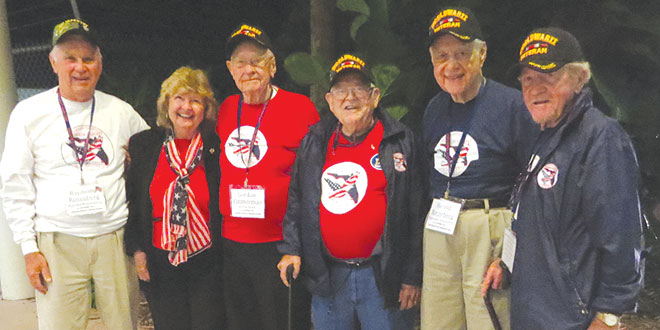 On Saturday, Oct. 25, there was the most amazing event I’ve ever had the privilege of witnessing. It was called “The Honor Flight,” and by now most of you have read about it in the local newspapers.

Today, though, I’d like to give you an up close and personal look from the Marco Island point of view. The Collier County Honor Flight was one of six Honor Flights from around the country. Marco Island had five veterans on board, all five from the new American Legion Post 404. Ray Rosenberg was the escort for his dad, Harold Rosenberg. Ray’s wife, Linda Spell, and I rode up on the bus together with Jean Merritt (a long time resident of Marco before moving to VeronaWalk), whose husband Jack was also on the flight. Jack and Jean’s daughter, Jackie, flew in from St. Louis to be her dad’s escort for the round trip flight and the tour in Washington, DC.

The bus was filled with a wonderful group of supporters, including Russ Colombo. Russ was not an escort, did not have a family member aboard, and was not meeting anyone. He was there strictly to support our veterans and all that they gave to our country. Very admirable indeed. Other Marco Islander’s on board the Honor Flight airplane to DC. were American Legion Post 404 members Don Mills, Chuck Purple (his lovely wife rode with us on the bus) and Gordon Timmerman.

The tears and goose-pimples started in the airport as soon as the bag-pipers started playing, announcing the procession about to take place of 50 veterans from World War II. Each of the seven Collier County high schools had one of their JROTC cadets escorting veterans on the airplane and around Washington DC; plus, there were more cadets at the airport at 4:30 AM before the veterans took off and then again when they returned at 11 PM, greeting the veterans with the traditional Saber Salute. As these veterans walked or rode by in wheelchairs, there wasn’t a dry eye, including theirs! Words cannot express how impressive this event was. Youth were singing in the airport; Boy Scouts were walking behind the veterans; and people cheered and cheered as each and every veteran went by. Our own American Legion Post 404 members were there, front and center, helping every step of the way.

The volunteers were like “angel volunteers” — every walk of life, every age, every job category — and were there to plan, prepare, assist, support, cheer and participate in every way they could. Even Dave Longfield-Smith from Costco was there in a leadership role working alongside everyone. The wind-breakers with an embroidered Collier County logo that the veterans wore home were a gift from Patrick O’Connor, a realtor, whose wife Brenda is the vice president at the Naples Area Chamber. He donates these jackets each year (four so far) and also rides as an escort with one of the veterans, which he has done for the last three years. Homer Helter donated all the embroidered World War II caps presented to each veteran.

Kathleen Passidomo, our very own state representative, was the escort for her Dad, Dr. Al Cinotti. Curt Clawson, with Marco resident Jim von Rinteln, (one of his assistants), was also in attendance to greet these hero’s from World War II. MBI Charter Bus donated all three buses, and the owner drove one of the buses himself. There was a fantastic police escort, comprised of Collier County Sheriff’s cars and Naples Police cars, that led us from the Fort Myers airport (RSW) to the Naples Airport. Very impressive!

If there is another Honor Flight, plan to be there. You’ll never forget it!