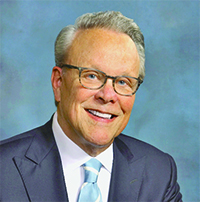 On a governmental board of seven individuals with strong personalities and varied backgrounds, the job of the man sitting in the middle can be a challenging, if not daunting task. In Marco elective politics the man sitting in the middle occupies the seat as the Chairman on the City Council, and for the next ten months that responsibility falls to Councilman Larry Honig.

The duties and responsibilities of the Chairman are called out in the City Charter; “The Chairman shall preside at meetings of the Council, shall have a voice and a vote in its proceedings and shall be recognized as head of city government for ceremonial purposes and for purposes of military law.”

The job itself is not granted any special administrative responsibilities, with the exception of signing official documents and running the meetings twice a month when they occur. However, the running of those sessions themselves has on occasion proven to be a challenge at times.

In November, Honig was only one of three incumbent councilors re-elected to office. Throughout his campaign he spoke of wanting to see “change” in how the council carries out its duties and make it more open to the public and efficient in its allocation of time spent on behalf of the city.

Honig has been true to that portion of his platform, and in December presented to his fellow councilors proposed revisions to the rules and procedures that the council works under. He has wordsmithed the document and adjusted the procedures, which will act to streamline and open the process.

As part of those adjustments, Honig has added the involvement of the Council Chairman in the creation of the council agenda for meetings, a task which was formerly handled solely by the City Manager.

“The changes I’m proposing will hopefully free up time for the council and the community to examine more deeply and more thoroughly the various important issues we are examining and those that will come before us,” said Honig. Those changes will be discussed at the first meeting in January when council convenes.

One of the other major tasks that Honig would like to focus on lies in the need to educate councilors and citizens alike regarding the challenges facing council in regards to spending, and prioritization of those needs.

“The education of the public and council on these requirements is very important going forward, if we are to make intelligent decisions,” said Honig.

His education, which includes both an MBA from Harvard and his extensive experience in business, may not have as much bearing on his successes as his ability to build a consensus between a majority of the members of council, who may not all share the same agendas.

Council will hold its first meeting of the New Year on January 9, starting at 5:30 PM in Council Chambers at 51 Bald Eagle Drive.