Honestly Abe? Glimpse into the personal lives of Abe and Mary Todd Lincoln 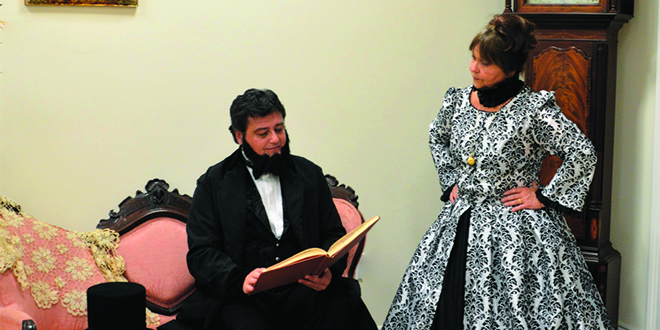 For the past several years, the Marco Island Historical Society has celebrated Presidents’ Day by presenting a series of remarkable reenactments, all centered around the lives of presidents as seen through the eyes of their wives. Then, last year, the ladies took a break and the men took on the roles of former presidents. This year’s presentation, “Honestly, Abe?” also departs from the norm: the one-act original play focuses on the lives of Abraham and Mary Todd Lincoln and features two well-known Marco Island thespians, Craig Greusel and Judy Daye, in the starring roles.

The year is 1865 and Mary Todd wakes up without her usual headache and wonders why. Suddenly she remembers that the South has just surrendered and that the Civil War is drawing to a close. Her husband, who has been leading a nation at war, may finally get a chance to lead a nation at peace.

No sooner had last year’s performance of “Mr. President” ended than preparations for this year’s production began. Greusel and Daye conducted extensive research on the Lincolns’ time in the White House, selecting what they thought was important and writing their own scripts. “The scripts were then blended together to create what they thought was the real-life story behind Abe and Mary in the White House,” says Betsy Perdichizzi, who serves as the play’s producer and director. “The result has been a seamless collaboration.”

According to Perdichizzi, the challenge of any re-enactment is to create a historical presentation without using modern slang or references. “Reenactments are so much more believable when the actors stay in character and in their proper time frame.” Perdichizzi should know; she is the author of several, nonfiction books about early Island life, has been involved with the Historical Society and the Re-enactors 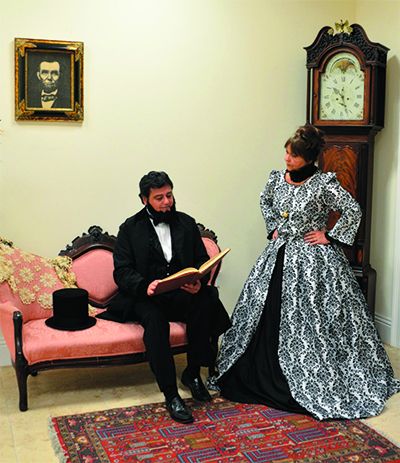 for years and portrayed Abigail Adams in a past first wives’ presentation before assuming her current duties.

Although a historical presentation, “Honestly, Abe?” is no stranger to modern-day media technology. The play makes use of two PowerPoint presentations—one consisting of photos from past performances and the other focusing on Lincoln’s times—enhanced lighting and a medley of foot-tapping music from the period performed live by Wesley English on the banjo and LuWayne Arnold on the keyboard.

The stars of “Honestly, Abe?” are old hands at theater arts. Greusel has been involved in several Marco Players and Island Theater Company productions, both as an actor and as director. He is also the music specialist at the Lely Elementary School in Naples and is the director of music at the Marco Lutheran Church.

Daye discovered her love for acting after retiring and moving to Marco Island. She has performed in numerous plays for both the Marco Players and the Island Theater Company and has re-enacted the lives of several women from the Bible for local church groups. One of her most endearing and well-known characters is Fannie Frugal, who always makes a statement at Island functions dressed in Bargain Basket recyclables (not necessarily in good taste).

A performance of “Honestly, Abe?” will be held in Rose History Auditorium on Sunday, February 19 at 2 PM. On Monday, February 20, the performances will be at 2 PM and 7 PM. Tickets are $20 (cash or check only) per person, with general seating at all performances. To purchase tickets, visit the gift shop at the Historical Museum or Kay’s on the Beach (1089 Bald Eagle Drive). The gift shop is open from 9-4 PM, from Tuesday through Saturday. The museum is located at 180 S. Heathwood Drive. For more information, call 239-389-6447 or visit www.themihs.org.