Homerun into Our Hearts 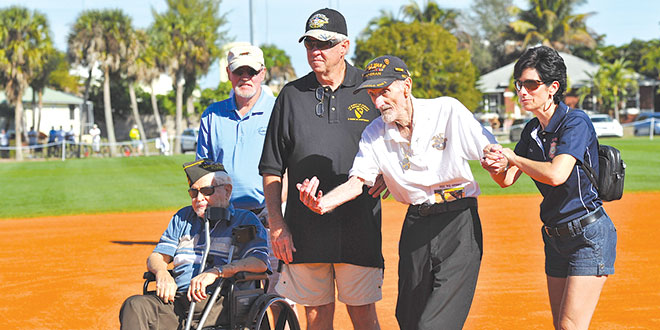 The Wounded Warriors Amputee Softball Team made a visit to Marco Island to play an exhibition game against a select group of resident players deemed the Marco All-Stars. The Warriors came to the island once before on November 11, 2011. They didn’t just come and swing a bat; their spirit and drive hit a homerun right into our hearts. After several requests from numerous people that they should return, return they did.

The game started off with a presentation of colors by the local VFW Post #6370. World War II veteran and amputee Owen Carr, and Pearl Harbor survivor Walt Tucker threw out the first balls. Each team member then honored these gentlemen by lining up at the mound to shake their hands.

Most of the game, the 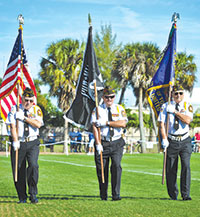 Their service to our country — for many of the freedoms we take for granted — is admirable, but it is their sacrifice and their ability to overcome personal loss which makes each of them a true hero in our eyes. They are an inspiration. Watching them play softball, without hindrance due to loss of limb(s), humbles us, reminding us how some of our own problems, by comparison, may be a bit trivial.

When it came to supporting the Wounded Warriors, this community stepped right up to the bat. A Meet-and-Greet fundraising event held at the Island Country Club the

With strong community support, the Marco Island All-Stars were proud to play the Wounded Warrior heroes.

Friday evening before the game was supported by more than 175 people. Estimates from game day put the crowd at nearly 2000! The bleachers were filled; the fence was lined with onlookers; and many sat around the outfield in the grass or on lawn chairs. The luncheon at the event after the game saw many supporters!

Events like this don’t just happen. It is through support from the community, the businesses that participate and the hard-work and effort of many that the Wounded Warriors Amputee Softball Team was presented a check in the amount of $28,000. The donations, however, continued after the game and are now at $35,000.

These Wounded Warriors are inspirational. So is the way this community came together to show its support for these young men. What a community we live in!