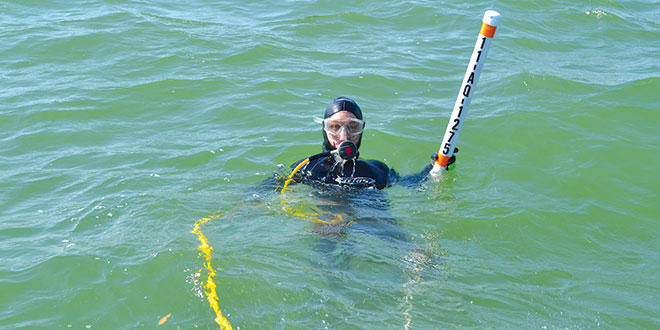 Nick spent most of the day covered head-to-toe; the process of getting into a wetsuit proved more complicated than I thought. PHOTOS BY MELINDA GRAY

Does the average seafood lover ever wonder about what is involved in bringing their favorite oceanic edibles to the table? As a seafood lover myself, I’ve always gravitated to the surf items on any menu, but I’ve never really put much thought into how that delicious shellfish came to land on my plate.

Where do the clams in my clam chowder come from? I’m a city girl from Ohio, which means they’ve always originated in a can, and until now, that was okay. But since moving to Florida, all of the seafood I’ve eaten has been fresh off from a boat, so naturally I began to ponder on my meal’s journey from the sea to me. All I needed now was someone willing to let me to tag along in my quest for answers.

Through writing about my fellow Goodlander, Nick Lemke, and his karate kids, I’ve inevitably gotten to know more about him, and months ago, I learned that in addition to his work in karate and computers, he’s a clam farmer. The title alone intrigued me, and as he described how it was done, I found myself curious to know more. He mentioned possibly needing some help in the future, so I offered my services should he ever need someone to work, and not one to let a great story go to waste, I also asked if I could write about it. I have since awaited my call to action.

When that call finally came, I gladly accepted the challenge. I welcome hard work and new experiences, and 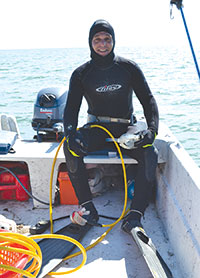 Nick spent most of the day covered headto-toe; the process of getting into a wetsuit proved more complicated than I thought.

was excited to learn about and be part of something so foreign to me. Aside from Nick repeatedly warning me of what I was getting myself into, I knew upon volunteering that actually working on any boat would be far different from the leisurely tours I’d been accustomed to so far.

I woke up early that Monday morning, packed up everything I thought I may need and arrived 10 minutes early. My first priority that day was to be a good employee. To observe and write about anything properly, I avoid disrupting the natural order of things, and not wanting to be seen as a nuisance, I always try to adapt quickly. Simply put, I really wanted to be a help to Nick; I wanted to do a good job, so getting sent home to change into more seaworthy clothes immediately after walking through his door probably didn’t bode well as a first impression.

Bouncing back with a quick change into my most labor-ready gear, I grabbed a much-needed cup of coffee and returned 10 minutes later to start loading equipment onto the boat. Following a brief stop at Calusa Marina to fuel up, we were off. The day was clear, warm and beautiful, and as we joined the outgoing tide and left Goodland’s canals in our wake, I started to feel the familiar tranquility I get by being out on the water.

We reached our intended location 20 minutes later and dropped anchor. Wet suit on and in the water, Nick stayed submerged for what seemed like an eternity, leaving me 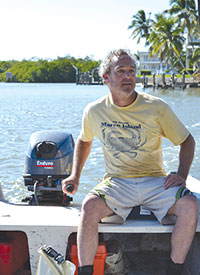 Happily returning with a boat full of clams, Nick guided us back into Goodland.

to wait on the boat and wonder what was next; I had yet to feel very useful. I threw him rope after rope and listened to my favorite playlist while he prepared each bag of clams for harvesting in the water below.

When he finally resurfaced, the hard work began; the clams were ready to be pulled in and tied to the boat — 12 full bags in all. One by one, he brought me the ropes, each with a heavy load of clams at the other end. To save my back, I braced my knees against the side of the boat and hauled in each bag until they were just under the water’s surface and then secured them carefully. With two bags to each cleat and two more tied to the boat’s seats, Nick climbed back on board.

At this point, he explained that the clams needed to hang underwater for an hour before we could bring them aboard. Purging them of their sea-bottom grit is a crucial part of the process, and along with maturing them in Florida’s cleanest water, it’s the reason his clams have a distinguishably fresh taste.

As we waited, I asked every question that had occurred to me up until then, and I had so many. He patiently answered, detailing how the clams started from what he referred to as seeds, and grew underwater until they were ready to be collected. He described his system of finding each buried bag of clams and how he’d had to dig to free them from beneath a thick layer 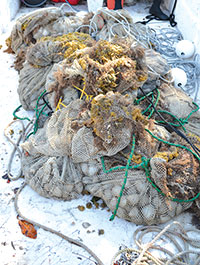 After a hard day’s work, the boat was noticeably pushed to its limits bythe massive pile of clams.

of sand and mud. I had already learned so much, and we were only halfway done.

When the hour-long wait was up, we pulled the heavy bags up out of the water and into the boat; it took the two of us to drag each one in. I honestly couldn’t picture anyone doing this alone; I certainly couldn’t have.

After admiring our extremely impressive catch that lay arranged in the center of boat, we began our journey back to Goodland. The water had gotten noticeably choppier since the ride out that morning, and we came to the consensus that his 17-foot Carolina Skiff couldn’t have handled anymore weight. It was a bumpy, wet ride home, but we made it back well before the time he was scheduled to meet Cutthroat Clams, the wholesaler in Pine Island that was expecting delivery of the clams we’d collected.

They separated the clams into seven baskets and loaded them up in less than 30 minutes. At their facility, machines would make quick work of tumbling, rinsing and separating the product before sale, but I wanted to see the course through from start to finish. Fortunately, a few days later, Nick was able to sell the last of the clams, and I got to help with those final steps, done by hand as he said he’s always done.

The job was complete; it was an odd feeling to have such a long day behind me, yet wish it were longer. My temporary boss treated me to lunch at the Little Bar, after which I went directly home to 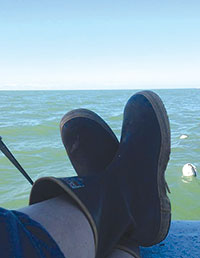 With plenty of time to kill, this amateur photographer caught a pretty great unintentional shot of heroversized, borrowed boots.

take a shower and ibuprofen. Hands down, that was some of the hardest labor I’ve ever done, and by no means am I a stranger to hard work.

I started that week with no knowledge of clamming — never imagined I would be able to work on a boat without getting in the way or falling overboard. In the end, though, I loved it, and with the help of a great teacher, I think I did pretty well.

Most importantly, I accomplished what I had set out to do. Along with a comprehensive understanding of where those yummy little clams come from, and what it takes to get them to their final destination, I now have a whole new level of respect for one of the hardest working men I know. I enjoyed the work, and would gladly help him again.

Sadly, any further clamming has been temporarily halted due to the ever-closer creeping of another year’s dreaded red tide. In hindsight, I feel very lucky to have had the opportunity to be part of something so big before the official shut-down was put in place the very next day. I will eagerly await the return of fresh Goodland clams, and solemnly vow that from this day forward, I shall never partake in canned clams again.