Homage to a Veteran 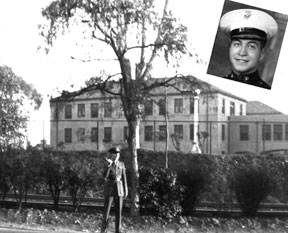 PHOTOS BY VICKIE KELBER/COASTAL BREEZE NEWS Faded photo labeled “Balboa” in an old album led to my trip to San Diego. The Naval Hospital is in the background.

On 11/11/11 at 10:15AM, I will be at the dedication of the Veteran’s Memorial in Veteran’s Park on Marco Island; I hope you will be there also. The VFW and a committee of residents worked diligently to raise funds to match the monies provided by the city to build this well deserved homage.

I would like to use this dedication as an opportunity to encourage travel to visit other US veterans memorials throughout the world whether it be the more recent World War II memorial in Washington DC, one of the many military museums throughout our country (check out http:// is.gd/cQUMO0 for a list), one of the American burial grounds overseas (see www.abmc.gov/cemeteries/index. php for locations), or paying homage to a veteran who was a friend or family member.

My father was a Marine in the Pacific theater during WWII. He served on the USS Hornet CV-8 as well as on Okinawa. CV-8 means the eighth aircraft carrier vessel built. I learned early that “once a Marine, always a Marine” as well as the true meaning of Semper Fi.

After he passed away, I wanted to visit a location that was important to him during his service. He trained in Parris Island and did some duty in Hingham, MA; neither appealed as the place to visit. I knew he spent some time in Hawaii because he used to tell a story about renting a bicycle, riding into the mountains, and finding beautiful wild orchids. Hawaii was alluring, but I didn’t know enough about his stay there to make a visit meaningful.

On board the Hornet, Dad celebrated his 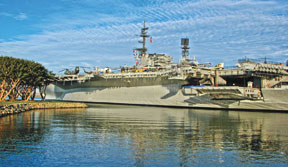 USS Midway serves as a museum of life aboard an aircraft carrier.

twenty first birthday by watching Doolittle’s Raiders take off for their historic raid on Tokyo. As part of Task Force 16, the Hornet participated in the Battle of Midway, Buin-Faisi-Tonolai strike, Guadalcanal campaign, and the fateful Battle of Santa Cruz Islands where the Hornet was attacked and sunk.

During that battle, Dad, a gunner on the ship, was injured; the gunners to the left and right of him were killed. As he was being transferred to the USS Mustin, one of the Hornet’s escort destroyers, via a bosun’s chair on a cable over the Pacific, someone yelled, “Here they (Japanese kamikaze) come, cut the cable.” Fortunately for him, they completed the transfer before cutting the cable.

He spent 14 months in hospitals in San Diego and New York recovering from his injuries and undergoing a series of surgeries. For a short time stateside he was assigned to Headquarters, Eastern Sea Frontier as an orderly to Admirals Andrews and Leary and then did public relations work promoting the sale of US Savings Bonds. When he finally recovered, albeit with a significant hearing loss, he returned overseas to Okinawa as a member of the Third Amphibious Corps.

I couldn’t easily visit the sites of Task Force 16, and really wasn’t interested in traveling to Okinawa. Then I remembered a faded photo in an old album; it was Dad in uniform with the notation “Balboa” (San Diego), so I knew he had been there in better as well as worse times. So, San Diego was to be the location for me to pay my homage and it turned out to be the 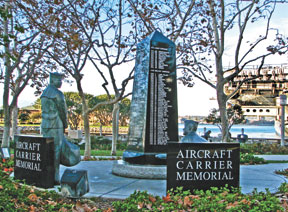 Memorial to US aircraft carriers along the waterfront.

On the waterfront in San Diego, near the old ship fleet landing where I know his ship had been at one point, is a “Greatest Generation” walk. Along it is a black granite obelisk Aircraft Carrier Memorial listing all of the US aircraft carriers, including the CV-8. A statue, “Homecoming” depicts a reunion of a sailor with his wife and child. Further along is a memorial to the Battle of Leyte and a tribute to Bob Hope and the military which are larger than life statues of Hope entertaining servicemen and women. The statues are arranged so that they invite interaction by the public.

“Unconditional Surrender”, a 25 foot colored statue recreating the famous photo of a sailor embracing a nurse in Times Square on VJ Day was on loan to San Diego at the time and, behind it, the USS Midway. The ship, CV-41, the first commissioned after World War II, now operates as a museum. Although this was a Midway class ship and the Hornet was a Yorktown class, a visit to it allowed me to envision somewhat what life on an aircraft carrier must have been like. I laughed when I saw the term “geedunk” used. It is a Navy and Marine Corps slang for ice cream, sweets, or snacks and for the shipboard store selling these items. My father used to refer to our homemade ice cream sodas as “geedunks”. This was the first time I had seen it used elsewhere. I later learned that it was a term first used by the military in the Marines Leatherneck magazine in 1931. 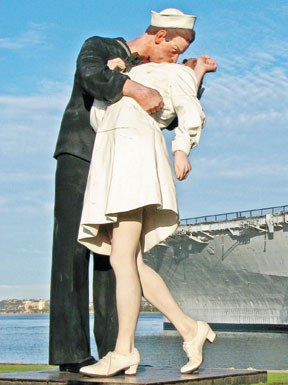 “Unconditional Surrender” a sculpture based on a famous photo of VJ Day.

highlight of our trip was a visit to one of the buildings that had been the San Diego Naval Hospital at Inspiration Point, Balboa Park, in which my father received treatment when he first returned stateside. Today, it serves as an administrative building for the City of San Diego. The adjacent Chapel, however, has been turned into a Veterans Memorial Center. Sun streams through its beautiful stained glass windows lighting the memorabilia on exhibit. Surrounding the museum is a Veterans Memorial Garden, as well as Vietnam Peace Memorial and Purple Heart Monument.

When my father died, I mourned him for the man he was and the life he had led. Our trip to San Diego was bittersweet; I felt close to him and, though still sad about losing him, was somehow more at peace with it.

If you are interested in paying homage to veterans or a particular veteran while traveling, another good resource is the website, invsoa.homestead.com/cemeteries.html a site “dedicated to recognizing those cemeteries which are the last resting place for our nation’s veterans.” It lists national and overseas cemeteries, has a searchable name database which includes site locations for those buried in veterans’ cemeteries , and a searchable World War II Registry.