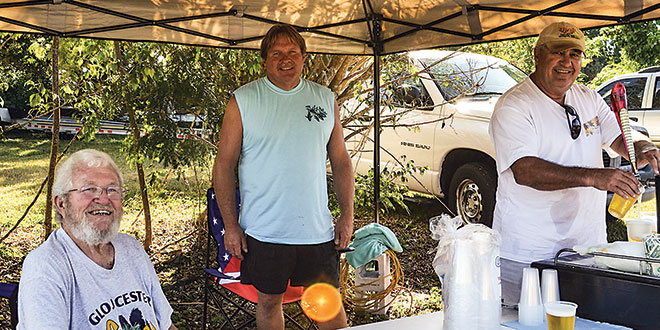 Goodland’s own Eduardo, Joe and Chuckles manning their tent, set up where “Chuckle’s Bar” was once located. They sold beer and wine to thirsty vendors and visitors.

It was a beautiful weekend to be outdoors, and Goodland’s Margood Harbor Park was abuzz with activity on Nov. 15 and 16 for the Goodland Civic Association’s (GCA) Annual Holiday Bazaar. Seeing another year’s success, the 2014 bazaar offered 52 vendors, one-third of which were Goodland residents. They lined the walkways, selling delicious food and a colorful assortment of hand-made arts and crafts.

The far-reaching tunes played by our talented local musicians, all who volunteered their time, and the mouth-watering aromas coming from the many diverse food tents, drew hundreds of people to check out the goings-on and shop. Parking,

selling raffle tickets and other behind-the-scenes necessities were taken care of by Goodland residents, also volunteering.

“I think it’s a great event for the community; it draws a lot of people here, so it’s bringing money into the community. Plus, it exposes the crafters, artists, musicians and all of our businesses to new people,” said Noreen Seegars, GCA co-chair. “It’s so unique, and we want to keep it that way.”

While trying to keep the spirit of the event the same, they are seeking feedback for ways to make it better. Since changing the dates and location of the bazaar two years ago, 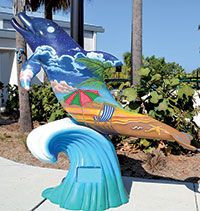 This beautiful dolphin, painted by Goodland resident and artist Denise Santos, sat outside the museum doors for all to admire.

it has become an even bigger hit, drawing more vendors and larger crowds, and there may be even more changes to come. But that will be up to whoever heads up the committee next year. Seegars said that she and Connie Fullmer, fellow GCA co-chair, will now pass the torch of organizing the event.

The GCA is a non-profit organization working within the community to facility communication with local governments. They also strive to promote community spirit and goodwill in Goodland. They work closely with the Goodland Arts Alliance in organizing the bazaar, and raise money with events like the Holiday Bazaar and pancake breakfasts year-round.