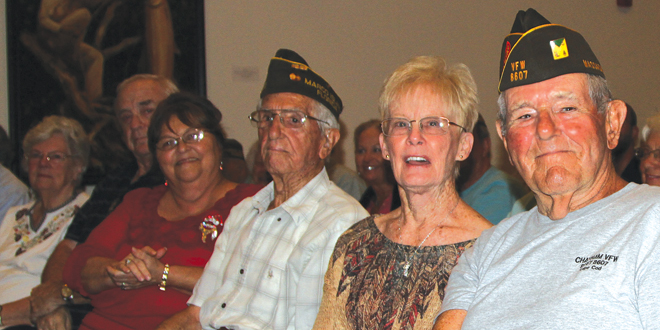 A lovely evening was had by all in attendance at the Christmas Island Style Holiday Concert for veterans held at the Marco Island History Museum’s Rose Auditorium. Steve Stefanides, chair of Christmas Island Style welcomed veterans and guests. He thanked Coastal Breeze News for sponsoring the event and Classic Transportation for providing transportation to those unable to drive themselves. Keith Dameron introduced Malenda Trick and the portrait series she has done to commemorate the military careers of 20 local veterans. The series will be on exhibit at various locations, including Hodges University. Jim Lang, Commander of VFW Post 6370 called the posts December meeting to order with the first order of business being

The Lely JROTC formally posted the colors. The Commander presented the unit with a Certificate of Distinguished Service from the VFW, in appreciation for the services they’ve provided during the past year for various island events.

to adjourn the meeting so the festivities could continue. The motion was carried.

The audience then heard from guest speaker, Harry Donovan. Sr. Harry can be seen in one of the most iconic images of World War II, the famous photo of General MacArthur as he walked ashore upon his return to the Philippines. “I didn’t know who MacArthur was!” Harry spoke about being in the navy at 17 years old. As a coxswain, it was his job to lead groups of marines ashore.

“I took 23 men ashore. They were attacked. I just knew they were all killed. I had to go back and get another group. Those were my orders. Surely, I led

Pastor Thomas McCully introduced the New Life Church choir. The choir regaled the audience with a variety Christmas selections backed by guitars, keyboard and drums. The performance was exquisite and received a standing ovation from the crowd. Following the concert, the veterans enjoyed light refreshments.

this group to their deaths, too! I went back and told my commander all of these men had been killed, I wouldn’t take another group ashore. He put me in the brig for refusing to follow orders.” The next day he was released. His commander said, “You could have been correct.” Harry also spoke emotionally about what it was like the time he was stranded at sea for four days and nights without food or water.

After the Navy, he became a Certified Public Accountant. He visited Marco Island in the early days and started to buy property. His economic prowess eventually led him to be a trusted Economic Advisor to President Richard Nixon.