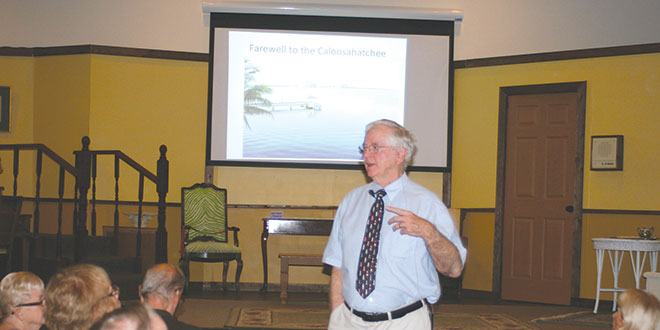 The Marco Island Historical Society opened its 2014-2015 season with a scenic voyage along the Caloosahatchee River guided by Dr. Kevin McCarthy, author and retired University of Florida professor of English and Linguistics. McCarthy’s book “10 Little-known Facts about the Caloosahatchee River” was brought to life at the Rose History Museum through his engaging narrative and power-point that included depictions of the river then and now.

Did you know that the Caloosahatchee River helps connect the Atlantic Ocean with the Gulf of Mexico? It is part of the cross-Florida water way which includes Lake Okeechobee. Built in 1937, the Okeechobee Waterway which runs from Stuart on the east coast to Fort Myers on the west coast is “the only true cross Florida canal and river system,” according to McCarthy.

“The river takes its name from the Caloosa Indians,” the author continued. “They were fierce and skilled warriors who attacked the Spanish and other Indian tribes. There may have been 50,000 Caloosa at the height of their power. The tribe is said to have been around Florida from between 500 BC and 1763, the year Spain turned Florida over to British rule. The remaining Caloosa went to Cuba, and by the late 1700s the tribe had died out as a result of attacks by other tribes and the ravages of disease brought by outsiders, McCarthy noted.

If you were to boat down the Caloosahatchee, you may be surprised to encounter three sets of locks which raises the water level for easy passage. Other unexpected sights include a quaint covered bridge along the banks of the river and hives of bees, according to McCarthy.

The author noted a number of small towns founded on the Caloosahatchee in the 1800s like Alba, settled in 1883 and Punta Rassa at the mouth of the river. There are a number of mitigation parks which cleanse the water of pollutants. Manatees are a popular sight around Fort Myers Park and the river provides the city drinking water and plenty of recreational opportunities. Famous residents of Fort Myers have included Henry Harvey Firestone and Thomas Edison. “He loved the Caloosahatchee,” McCarthy said of Edison.

One final fact about the Caloosahatchee River is that it allows homes to be “waterfront” in Cape Coral. Land was originally purchased cheaply and dredged, according to McCarthy, thus providing waterfront property.

The program concluded with a lively question and answer session. McCarthy has written a number of non-fiction books about Florida waterways and history. The next speaking event hosted by the Historical Society will be November 18 at 7:00 pm featuring Bob McConville on “Dolphins= Clean Ecosystem.”