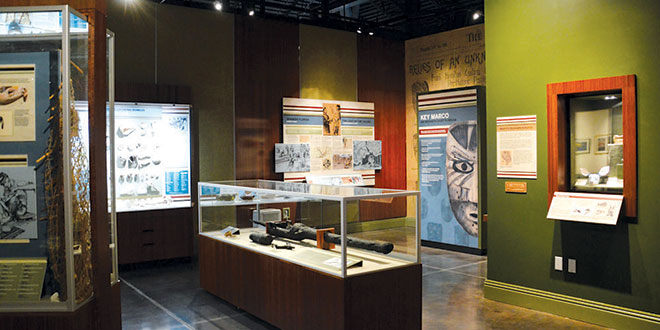 This must be the “season” for awards because the Marco Island Historical Museum (MIHM) and the Marco Island Historical Society (MIHS) have sure taken a few. The Museum’s permanent exhibit, “Paradise Found,” a collaborative effort of both groups, has just received the 2015 Museum Excellence Award from the Florida Association of Museums (FAM), a membership organization for museums and museum professionals.

And that’s not all. The Historical Society also received two honorable mentions in the annual publication competition sponsored by the Southeastern Museum Conferences (SEMC), another major networking organization for the museum community throughout the Southeastern states.

Pat Rutledge, MIHS President of the Board and Executive Director, noted that, “the recognition received from these prestigious museum associations underscores our efforts to build the Marco Island Historical Museum into a world-class museum.” 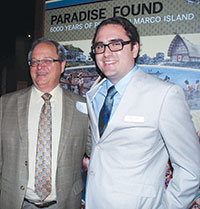 FAM Museum Excellence Award was created to recognize outstanding contributions made by museum groups in the State of Florida. “There were so many museums and so many amazing exhibits [entered in this contest],” said Austin Bell, MIHS Curator of Collections. “For us to have won is a huge honor, a momentum builder…and validation from a network of peers or professional colleagues. It is affirmation that we are headed in the right direction.”

Bell and the MIHS Exhibit Committee, headed by Craig Woodward, are responsible for the content and the configuration of the “Paradise Found” exhibit, including its dramatic entry into the full-scale, model Calusa village beyond. The exhibit chronicles the 6,000-year history of Marco’s indigenous and Calusa Indians, the Spanish encounter and the Cushing dig. Its design, fabrication and installation,

just like the Calusa village exhibit opened in 2013, were done by Creative Arts Unlimited, which is located in Pinellas Park, Florida.

The SEMC’s Annual Publication Competition was established in 1988 to recognize and reward excellence in museum promotional materials. Entrants can garner honors in a number of different categories, among them Gallery Guides, Books and Catalogues, Invitations and Annual Reports. The Society’s brochure, event invitation and posters—designed to

promote the CATapult Campaign, which provides core funds for underwriting the return of the Key Marco Cat and other Calusa artifacts—won Honorable Mentions in two additional categories: Brochures and Rack Cards and Campaign. Naples resident Sally Woliver, a consultant to MIHS, created the concept and wrote the copy for this award-winning package, and Sherri Morrison, an artist from Goodland, did the layout and design.

“I am so pleased with these awards,” said Pat Rutledge. “Sherri’s striking designs and Sally’s outstanding copy and concepts are consistently award-worthy and are contributing greatly to the continued professionalization of our organization.”

The Marco Island Historical Museum is located at 180 S. Heathwood Drive, across from the library. The Museum is open Tuesday to Saturday from 9 AM to 4 PM. For more information, call 239-389-6447, visit www.theMIHS.org or like us on Facebook.