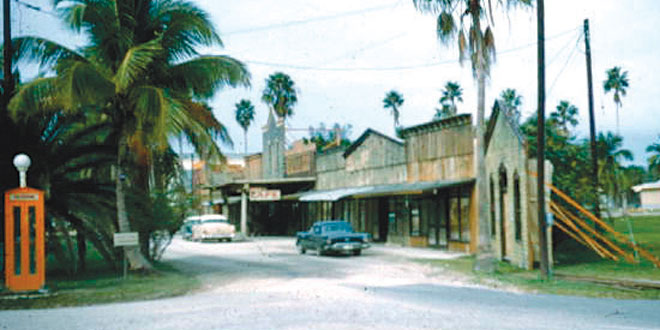 Production crews created scenery when necessary during the filming of ‘Wind Across the Everglades’. SUBMITTED PHOTO

Hollywood came to Everglades City in 1957 with a star cast to film “Wind Across the Everglades”, the story of plume hunters in the early 1900s. The Everglades Society for Historic Preservation invites the public to come and relive this event on Friday, Jan. 10, with a screening of the film at Jinkins Fellowship Hall behind the Everglades Community Church. The show starts at 5:30 PM, and there will be free popcorn and soda.

Burl Ives, Gypsy Rose Lee and Christopher Plummer took leading roles in the film, but also playing their parts were Emmet Kelly (the clown) and a young Peter Falk. Local talent included Totch Brown (who sang as “One-Note”) and Cory and Mary Osceola.

The production team, headed by Budd Schulberg and Nicholas Ray, took over the Rod & Gun and changed the Depot into a station in the Miami area. They also used buildings along Broadway where the tennis courts are now and even created some dummy scenery.

The script was written by Schulberg after he met Bud Kirk of Marco Island and learned about the area. The original book “Across the Everglades” has a lengthy introduction by Schulberg describing his discovery of the glades and its colorful history. His previous script “On the Waterfront” won an Academy Award in 1954.

“Wind” was released in 1958 and reviewed in The New York Times Sept. 12 issue. Bosley Crowther wrote: “Something of the wild natural beauty and the human barbarity that prevailed in the great swamps of Florida 50 years ago is caught in Stuart and Budd Schulberg’s ‘Wind Across the Everglades’ … Though it happens to be one of the most disordered professional motion pictures we’ve ever seen, it also happens to be unusual, robust and picturesque.”

Everyone is welcome. For more information, please call 239-695-2905 or visit www.evergladeshistorical.org.