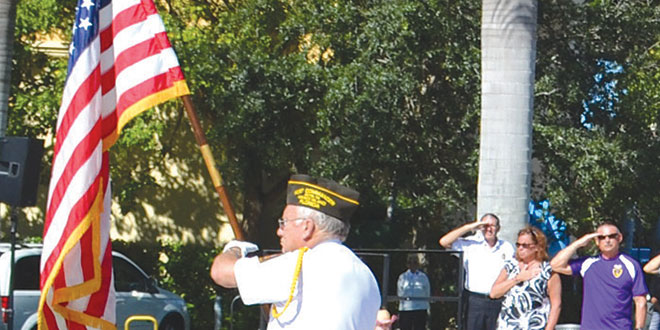 The annual Veterans Day ceremony at Veterans Community Park will take on a new look this year.

Set for 11 AM, November 11, the ceremony will also include a number of other firsts.

One will be the color guard, which will be comprised of representatives from military organizations, carrying flags representing the four branches of the military, as well as from Marco’s Boy Scout Troop 234. The American flag will be carried by a combined color guard made up of members of the city’s police and fire-rescue departments.

Keith Dameron, vice president-branch manager of Marco’s Iberia Bank branch, will serve as master of ceremonies, rather than the commander of one of the island’s military organizations.

Also new will be a three-plane flyover at the conclusion of the national anthem, sung by Rose Kraemer, of Marco. The vintage WWII aircraft will be piloted by members of Marco’s Civil Air Patrol squadron.

There will also be a special presentation by Lee Rubenstein, commander of American Legion Post 404, who will present each WWII veteran present with a small, sealed, glass vial of sand from Omaha Beach that he obtained this summer when he visited Normandy.

And as is tradition, Herb Savage will sing “God Bless America” to help close out the program.