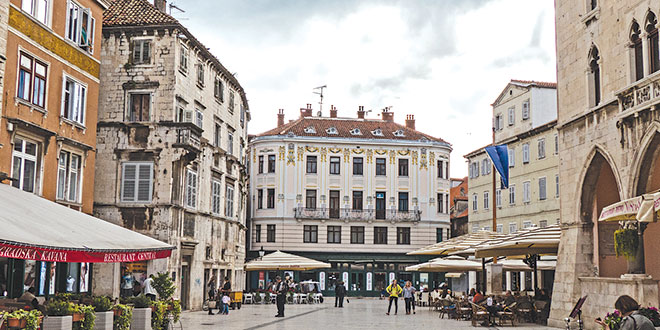 Narodni trg, the People’s Square, in Split is a popular place to stop for refreshment. PHOTOS BY VICKIE KELBER

Along the beautiful Dalmatian coast between Dubrovnik and the Istrian Peninsula is the UNESCO World Heritage Site of Split, a major ferry and cruise ship port. The drive north from Dubrovnik passes through the fertile Neretva Valley known for high quality citrus fruit. Fruit and honey stands line the road. The drive also traverses that small portion of Bosnia that is that country’s only outlet to the sea. A local guide told us that for at least five years there has been talk of building a bridge to connect Dubrovnik directly with the rest of Croatia. At election time, the Croatian politicians promise it, but never deliver after elected. The Croatian people remain optimistic, though.

The highway that offers stunning views of the Adriatic on one side and the mountains on the other was built after the Balkan Wars and has cut five hours off of the trip to the capital of Croatia, Zagreb. Near the end of the journey to Split, there is a bridge that is sometimes closed due to the gusty bura (bora) winds. When that occurs, more commonly in the winter, an alternate route must be followed. Winds are an important part of life in this part of the country. Many of the lush islands here look barren on one side from the bura; the sea mist it kicks up kills the vegetation. There also are other types of winds, and until the 1980s, one could use the warm, moist jugo (known as Sirocco in other areas) wind as an excuse to seek a 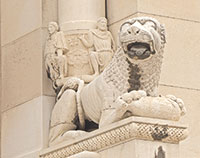 Lion at the entrance to Cathedral of St. Doimus, formerly Diocletian’s mausoleum.

In the fourth century, in anticipation of his retirement, the Roman Emperor Diocletian decreed that a palace be built in Split. He was from Dalmatia which in his day was part of the Roman Empire. He retired there in 305 AD. After his death, the palace was used for offices and for a while abandoned. When the Avars and Slavs invaded the area in the seventh century, locals took refuge in the palace, establishing homes and businesses. The city grew and the presence of the Venetians in the 1400s saw them add their architectural influence.

Today, Split maintains a remarkable old town, a good part of it incorporating portions of the palace. We’ve seen many ruins, but never any so extensively interwoven with the modern world. Touring the old town, one sees parts of ancient gates, walls, courtyards integrated into apartments and businesses. Proceeding through the Bronze Gate leads to the underground passage that once served as the cellars of the palace. Today, electric lights of the souvenir stalls ensconced here emit an eery yellow glow on the walls. Exit the passageway to the former courtyard or Peristyle with its Roman temple ruins, cathedral, and original Egyptian sphinx placed there by Diocletian. Diocletian was known for his persecution of Christians. Perhaps it was “just deserts” that turned his Mausoleum into the Cathedral of St. Dominus in the seventh century.

There are so many parts to the complex that was once the palace that a guided tour is recommended. Before leaving the old town, take some 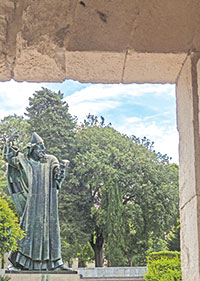 Mesetrovi?’s sculpture of Gregory of Nin viewed through the Golden Gate.

time to stroll the narrow alleyways, explore the medieval and neo Renaissance squares, visit one of the museums or art galleries, especially the one devoted to noted Croatian sculptor Ivan Mesetrovi?, and take time to enjoy refreshments at one of the cafes. If you don’t have time for the Mesetrovi? gallery, at least see his two famous works in Split, the statue of St. John the Baptist in the Temple of Jupiter and the Gregory of Nin sculpture just outside the Golden Gate. Rubbing Gregory’s toe is supposed to bring good luck; it is worn and shiny from all the tourists who stop to do this.

The seafront promenade know as the Riva faces the palace’s southern walls and is a lively place to also enjoy refreshment or just rest on one of their inviting white benches; from there you can watch all the activity. Besides being a busy port, Split is home to an active shipbuilding industry. The evenings, after cruise ships and day tours have departed, offer a less chaotic time to really enjoy a stroll on the Riva.

Adjacent to the old town (on the right as you look at it from the sea) is a large market (pazar) with a variety of produce, flowers, clothes you probably wouldn’t want to buy, leather goods and various miscellany. The fish market is in another location, within the city off of Marmontova Ulica (Street). This marble lined street runs from the sea to the Croatian National Theater and is home to a variety of fine shops.

View of Split from the Riva, seafront promenade.

it can be difficult booking rooms in Split. Consider nearby Solin. It doesn’t have many rooms, but it is away from the hustle and bustle of Split, offers peaceful parks built around the Jadro River, local cafes and affords the opportunity to visit the ruins of Salona, the purported birthplace of Diocletian. Alternatively, Salona can be reached by car or public bus, but don’t expect the ruins to be too impressive.

Although most people just spend a few hours in Split as a cruise or tour stop, if spending more time, consider a short day trip to the pedestrian only town of Trogir. Located on a nearby island (although the access to it is very short), it is also a UNESCO World Heritage site and home to an impressive cathedral. It is also accessible by local bus. Another option is a ferry to the town of Supetar on the island of Brac (“BRATCH” ). Known more for its sand and gravel beaches that are surrounded by dark, pine forests, there are the requisite churches, one with adjacent fifth century mosaics, interesting graveyards with works by noted Croatian sculptors and, of course, restaurants, bars, and cafes.

The island of Hvar, about a two hour ferry ride away from Split is becoming a “hot” destination all its own. Best known because it has become the haunt of a number of celebrities, it is more of a vacation destination than a tourist attraction. There are some landmarks to visit in Hvar Town with its beautiful town square and the island is also known for fragrant fields of lavender.