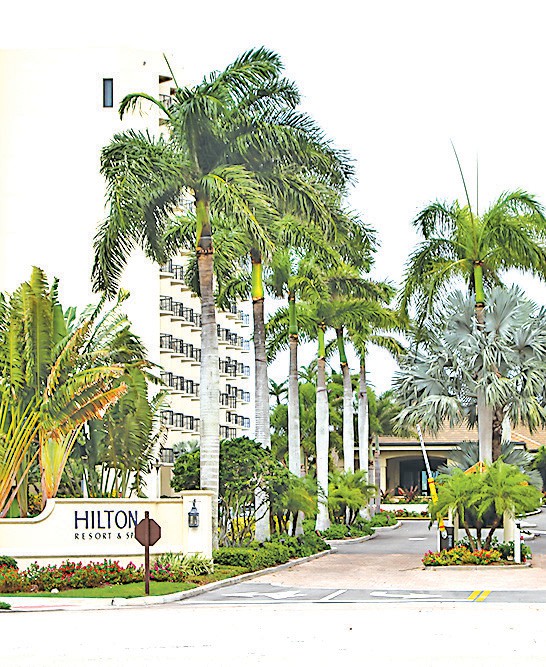 Upon arrival, MIFR personnel found a fire in an electrical room on the ninth floor of the hotel. Crews extinguished the remaining fire and assisted Hilton staff.

That morning, a tweet from the MIFR Department’s official Twitter account (@MarcoIslandFire) stated the following: “MIFR on scene of a fire at the Marco Hilton. The fire on the 9th floor was electrical. Smoke, water damage and is being evaluated.” No injuries were reported.

The fire resulted in the Hilton Marco Island closing, and the relocation of over 200 guests to other locations, including the JW Marriott Marco Island Beach Resort and other hotels off-island.

Jada Shigley, JW Marriott’s Director of Reservations, stated that the JW Marriott “coordinated with the Hilton Team to assist in relocating approximately 100 rooms of evacuated guests.”

Kevin Patrick Bedat-Fitzpatrick, who was visiting Marco Island from Wisconsin, was one of the Hilton’s evacuated guests who were relocated to the JW Marriott. Kevin said, “Hilton did [an] amazing job. We ended up at JW Marriott. Some customers got irate and local police had to be called, but I give a big shout out to Hilton staff.”

As of press time, the hotel remained closed. A statement on the Hilton Marco Island website (www.hiltonmarcoisland.com) states the following:

On Friday, June 9th the Hilton Marco Island Beach Resort & Spa experienced an electrical fire, which caused minimal damage. There has been subsequent minor, isolated flooding due to sprinkler activation. Visiting guests are being relocated to other accommodations while the hotel works diligently to fix the problem. The property will be closed until repairs are completed and the hotel can ensure its highest quality of service. During the hotel’s closure, cancellation fees are also being waived. The resort sincerely apologizes for the inconvenience to its loyal guests and looks forward to providing further updates.

Check back with Coastal Breeze News for updates on Facebook and at coastalbreezenews.com.