Hillary Clinton and the FBI A Retired Agent Weighs In 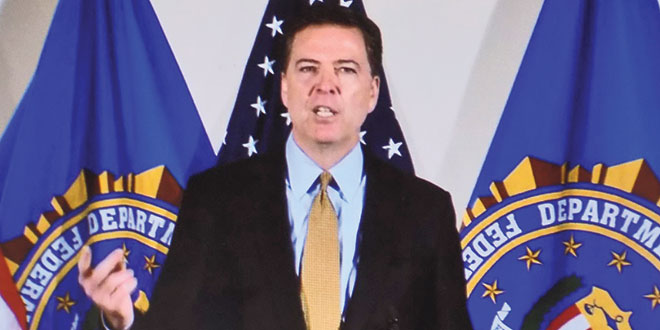 Submitted Photo FBI Director James B. Comey, during July 5th press conference. “Although there is evidence of potential violations of the statutes regarding the handling of classified information,” he said, “our judgment is that no reasonable prosecutor would bring such a case.”

When I heard that the FBI had recommended that no prosecution be undertaken of presumptive presidential nominee, Hillary Clinton, I was dumbfounded. But not for the reasons you might think. On July 5, FBI Director James B. Comey called a press conference and announced that the FBI wouldn’t be recommending criminal charges against Hillary Clinton for alleged mishandling of classified material on her private email server. I spent 31 years as an FBI special agent, mostly investigating and aiding in the prosecution of criminal cases. I am also versed in the history of the FBI and was not aware of any case where an FBI executive ever made such a public recommendation (or any recommendation for that matter). It may have happened but I was not aware of it. “This is not the proper way to go about a criminal investigation,” I thought to myself, “It shouldn’t have been handled this way.”

Title 18 United States Code, is crammed full of violations deemed to be criminal by the U.S. Congress. 18 USC is our federal criminal code. The FBI has primary jurisdiction over all of them – over 200 criminal categories. More are added all the time. These cases range from interstate transportation of stolen property to cybercrime. The email statute, used as the basis for the Clinton investigation, is listed in Title 18 USC 793(f).

A federal criminal case can be opened in a number of ways, the most common being by a complaint registered by a citizen or government official. An article in the newspaper or information from an informant may also spark an investigation. It is easy to open a case; a short memo will do. Every case opened is a statistic for the case agent and for the field division in which it is opened. It shows that the agent and his field division are doing their jobs. Opening cases is encouraged. Closing them is not as easy. Once a case is opened, I am aware of only two ways they can be closed – either by declination of prosecution or by successful (or unsuccessful) prosecution in federal court. In either case, the nearest U.S. Attorney’s (USA) office usually makes the call. The vast majority of cases are closed only after declination (refusal to prosecute). The case agent may have determined that the case is going nowhere, or feels that he has exhausted all leads. In either case, he needs the USA’s imprimatur to either take the case before a grand jury, or close it and move on to something else. I can’t remember a single criminal case I opened that did not end with a declination or by a successful (or in one case – unsuccessful) prosecution. There was no other way to close the darn things. In presenting cases to the USA, I certainly expressed my opinion as to the reliability of the evidence and the credibility and demeanor of the witnesses who would be testifying. When all was said and done however, it was his call, and he would let me know what it was going to be before I left his office.

The FBI has 56 field divisions today ranging from Anchorage, Alaska to New York City. The Director appoints a Special Agent in Charge (SAC) to oversee each division. (Because of its size, New York and a few other large divisions are headed by an Assistant Director in Charge.) The SAC generally stays out of the way in criminal investigations, trusting in the case agent and his supervisor to touch all the bases. In cases involving government officials, company executives, or celebrities, the SAC is more likely to stick his nose in. Successful prosecution of these cases brings notoriety and is looked upon with favor at FBIHQ. The SAC may bring extra pressure to ensure that this type of case is expedited.

In reading the applicable statute, 18 USC 793(f), I believe a case could have been made that Clinton was grossly negligent in the unauthorized use of her personal email server. On the other hand, I have had several cases involving corporate executives where, by loosely interpreting the applicable statute, a prosecution would have been possible. In some of those cases, the subject(s) did not benefit by the lapse in judgment and was otherwise an upstanding citizen and family man. Most important, a prosecution would have resulted in the ruin of his family, the closing of his company (which otherwise was turning out a good product), and the laying off of his employees. The investigation itself had already disrupted his life. I felt that much would be lost and little gained by the prosecution of such individuals, who otherwise had led exemplary lives. When presenting such a case to the USA’s office, I didn’t hesitate to lay out the exculpatory and extenuating circumstances. I let him know that I wasn’t keen on upending so many lives based on a technical violation. Because of my experience and successful track record in court, my lack of enthusiasm bore great weight with the United States Attorney’s Office. He didn’t want to go to trial with an agent whose heart wasn’t in it. In the few cases where this occurred, the USA acceded to my recommendations and the cases were closed after declinations. My SAC was often not happy about these situations. The office would be losing notoriety and attention. There would be no “Attaboy” from the Bureau. Because I was otherwise bringing in a steady stream of convictions, fines, savings, and recoveries, he would bite his lip and let it slide.

What occurred here was not much different from the way I had handled such cases in the past. Except, it was played out at the highest levels of government on a national and international stage, culminating on national TV. It could even be argued that a prosecution here would even have changed the course of history. So here, on July 5th, was Director James Comey, publicly laying out his case why Hillary Clinton should not be prosecuted. What he said would have been presented to Attorney General Loretta Lynch after the press conference. He decided, as I had done in past years, that prosecution would do far more harm than any possible good. He made many of the points I have made above. I should add that, to me, Director Comey has been one of the most impressive FBI directors I have known. His integrity and moral compass seem to be unimpeachable. Agree with him or not, only such a man would have had the courage and credibility to do what he did.

How the FBI Director handled this situation was, in my view, in accordance with the highest FBI investigative standards and procedures. That he did it in a public forum was appropriate to this unprecedented situation.