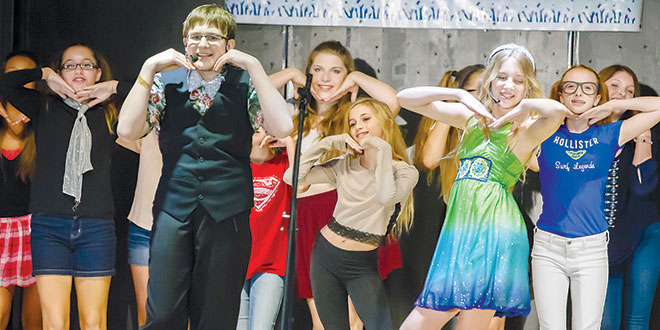 The last theatrical production for Marco Island Charter Middle School’s 2014/15 school year was High School Musical, Jr. Karen Raymond, as director and choreographer, continued her legacy of producing smash hits. It is amazing what great shows are produced at the middle school level and it’s indicative of the quality of teaching. Karen has a knack to pull the best effort from each and every student, from stage hands to set designers, whether singing as part

of a chorus or doing a solo. These students are giving their best, and their best creates an amazing show.

Students not only portrayed their characters brilliantly, but they sang and danced their way into the hearts of all in the entire audience.

The presentation began with a cheer from the Eagles Cheerleaders, which was joined by the ensemble. The Start of Something New sung by the character Troy Bolton (Carson Essi) and the ensemble. Get’cha Head in the Game performed by

the Team and all the boys. Bop to the Top auditions were by James (played by Jimmy Munoz). What I’ve Been Looking for sang by Ryan Evans (Jesse Giansanti) and Sharpay (Mikayla Rivera). What I’ve Been Looking for was by Troy (Carson Essi) and Gabriella (Lexi Harrington), Stick to the Status Quo was performed by Zeke (Dagen Rash), Martha (Josie Torres), Ripper (Bailey Dunstan), Mongo (Victoria Novotny), Troy (Carson Essi), Gabriella (Lexi Harrington), Sharpay (Mikayla Rivera) and the entire ensemble. Counting on You was sung by Chad (Jacob

The production was fitting, as many of the cast will be moving onto high school next year. As with all performances, Karen Raymond was surrounded by the performers and given a huge group hug from the students as a sign of their appreciation.

Karen is sure to thank Mrs. Heidenreich and the yearbook class and ALL parents. Lights and Sound were handled by Roger Raymond, Morningstar Music and Kurt August. Set and

Design was headed by Lauren DeHooghe, the Show Video by Josiah Hurtley and Martie Miller, and the spotlight was handled by Mr. Radlovacki.

Congratulations to all of the students for a great performance!