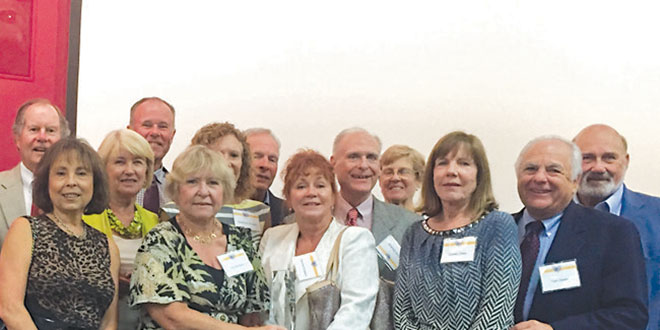 Hideaway was honored for their work with Guadalupe Center’s After-school, Summer and Tutor Corps Programs and the American Cancer Society. This year the group also built their first home for Habitat for Humanity.

Hideaway’s nomination came from the Guadalupe Center. Over the past thirty years the group has raised more than $5.5 million for the center, and has been instrumental in initiating a number of programs aimed at educating Immokalee children.

Hideaway was instrumental in establishing the Guadalupe Center’s After-school Program and Summer Programs in the early 1990s. These programs provide support to at-risk children in the Immokalee public schools, kindergarten through second grade.

The Guadalupe Center’s college preparatory Tutor Corps Program is also supported by Hideaway, funding the hourly wage paid to high school students who tutor in the after-school program, and

ensuring students accrue up to $4,000 for each year in the program to be used towards college. Hideaway residents are also the majority donors to the Guadalupe Center’s College Scholarship Fund.

Hideaway has shown a deep commitment to the American Cancer Society (ACS). Over the past 10 years Hideaway residents have raised more than $1 million for ACS. Hideaway participates as a team at the Relay for Life and they organize home tours, fashion shows, golf tournaments, casino nights, and many other fundraising events throughout the year. The American Cancer Society, Marco Island recently described Hideaway as a “Three T’s Group,” one that pledges “time, talents and treasures” to help support ACS, and many other important causes.

Each year the Association of Fundraising Professionals (AFP) pays tribute to individuals and organizations throughout the United States that have made a difference in their communities through philanthropy. The AFP motto is “change the world with a giving heart.” For more information about the AFP go to: www.afpeverglades.afpnet.org or www.facebook.com/AFPEvergades.