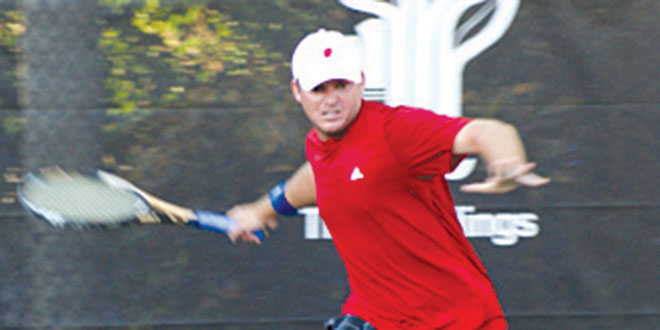 Earlier this month, Hideaway Beach hosted the 4th Annual Open Doubles Tournament and it showcased some of the finest tennis players in our area; 3.0 through 4.0 divisional stars exhibited their many talents over a two-day period. On Wednesday, March 26 at 4:30 PM, the Hideaway Beach Tennis Club will be running the finals of the prestigious Pro league, and they will be using a different format than what was done over a 20 week period. Prior to the playoffs, players often played with their favorite winning partner and they played one two out of three set match. The new format will be one-set only and this will consist of three different sets or pairings.

Play will begin promptly at 4:30 PM and should conclude at 6:45 PM. For example, the number one’s will play on courts one and two and will play a total of three sets of tennis. Each set will go to five with a tie break at four games all. Not only will we have great men’s doubles matches but perhaps the most compelling matches will be our mixed doubles category. What other sport, other than tennis, offers a form of mixed doubles? Wow, mixed doubles is

so compelling due to the large amount of strategy; poaching is at a premium and lobbing might be the key to success.

Without a doubt, the hottest player in this field is Hideaway Beach’s summer professional Tye Myers of Naples. His game is on fire; he just won the Wyndemere Challenge Doubles Classic and last weekend, captured the Cascades prize money event – losing less than five games in three matches!

The outstanding aspect of Tye Myer’s game is the fact that he really doesn’t have any weaknesses; his service return is so solid and his steady play has propelled him to the top of the game in our area. Tye Myers is a local product who may be one of the most gifted players in the last 20 years.

However, it is important for me to showcase a few of our other local standouts: Jesse Witten, Sarah Witten, Lauren Embree, Keith Embree, Evan Austin, Brett Clark, Gordon Watson and Whitney Eber. It was not that long ago when Jesse Witten (freshman at Kentucky) reached the finals of his first NCAA tournament and also won a set at the US Open against Novak Djokovic.

The amazing Lauren Embree played in the Women’s French Open, won the

Tye is on FIRE.

state high school championships and then became one of the finest college players while starring at the University of Florida. All of the players on this list (I didn’t mean to leave anyone out!) have accomplished so many incredible feats on the tennis court which includes national and divisional titles.

Professionals will be coming from the following clubs: Eagle Creek, Hideaway Beach, Player’s Club, Grey Oaks, Quail Creek, the Landings, Pelican Marsh, Longshore Lake, Vineyards, the Quarry, Mediterra, Treviso Bay, Pelican Sound, the Strand and Cambier Park. In all, there will be 32 different professionals playing on courts one through eight. We are also running a $10 raffle for a Wilson tennis racket of the winner’s choice!

If you are interesting in viewing this outstanding doubles event, please contact Doug Browne at dbrowne@hideawaybeachclub.org or call the office 239-642-2845. If you love great tennis or if you want to watch the pros demonstrate the art of doubles, come join us.