Hideaway Chips away at Cancer 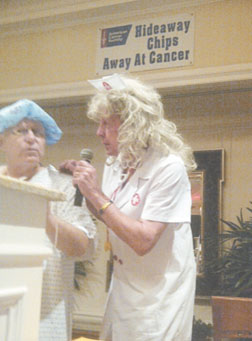 In its seventh annual run, Hideaway Beach hosted the much anticipated “Hideaway Chips Away at Cancer.” The event consisted of many different opportunities for members of the Hideaway Beach community to donate to the American Cancer Society. This year, the committee was hopeful for an even greater response from the community which raised over $120,000 in 2011. An amazing sum!

Bill Dean, chairman of the “Hideaway Chips Away at Cancer” committee, was very happy with the turn out for the January 29th event, with 95 players for the Golf Tournament and 165 for the dinner and auction events, including members, their families and friends. During the golf tournament, Don Crockford, explained that there were many different ways that members could donate their money to the cause. Other than partaking in the golf event itself, “members could purchase mulligans, an opportunity to have a second chance at making a shot, or they could donate money, via shots made by the resident golf professional, Michael O’Brien, on the most difficult hole at the course.”

This hole, number 5, crosses 250 yards of water. According to Michael, “the hole was difficult due to the direction of the wind.” Michael gave members a chance to take a break from their golf swings and watch him instead. Golfers contributed $20 for Michael to hit their ball onto the green. Michael claimed. “I’ve been having a wonderful time out here! It’s great to work with the members of the club in a less formal setting for such a good cause. I know them all very well, working with them all of the time on their swing. But today is different, since we all have the chance to take a swing at cancer!” Another opportunity for members to donate came in the form of an ‘Honorarium’ posted on each hole, which included the name of the donor as well as the honoree. The honorees included family and friends who have or have had cancer.

The golf tournament was followed by an elegant cocktail party, dinner and the auction events. Bill Dean and his committee and the Hideaway Beach Association spared no expense to provide a gracious evening for the guests. Members and their families were able to make their bids on the silent auction items as they socialized before dinner. A live auction was held later on during dinner. All of the proceeds from the day’s events were given to the Marco Island Unit of the American Cancer Society. Some of the many unique items available in the silent auction included “Hideaway Artist” gifts.

These are works of art created by members of the Hideaway Beach community and donated to the silent auction. For example, Mitzie Guthrie donated a “Handmade Mermaid Mirror” with beautiful shells arranged around the mirror edges. Carl de Riseis donated his framed “Italian Scene” photograph. There were many other items available in the silent auction, including several donated by many Marco Islanders and area businesses. Harbor Goldsmith donated a beautiful necklace called the “Lapis Opal Necklace.”

Even sports professionals made their services available for private instruction including, Hideaway Beach Tennis Professional, Doug Browne, and Hideaway’s Michael O’Brien. The live auction included a number of local organizations offering their services to the members, among other unique prizes. A wonderful dinner for eight with freshly flown in Maryland Crabs, was donated and prepared by Jean Clark.

Another auction item included Cool Beans Cruises, offering a sunset cruise for six people; donated by Linda & Tom Sessa. The cruise included shrimp cocktail, champagne, and wine. A special “Hideaway Cancer Wine Wall” developed by Tommie Rowland, offered a chance to bid on wines. According to Tommie, “the wall has a sum of 50 wines. Members and guests donate $25 and pick a number that correlates with a bottle of wine on the wall. The brand to the buyer is unknown and the member takes a chance on an ‘over the top wine’ or a standard wine.” The finest wines included Stags Leap Merlot, Opus One 2004 and Coup de Foudre 2004. Melissa Felice, Executive Director, of the American Cancer Society’s Marco Island branch attended the Hideaway Club event. Melissa said, “The generosity of Hideaway Beach members is humbling and we are grateful.”

The American Cancer Society’s Hope Gala will be held on February 25th and the Sporting Clay shootout event on March 21st. Bill Dean has coined a phrase. “Let’s kill cancer.” It was the theme for the entire event and Hideaway residents responded generously to the cause. Funds raised this year will be directed to the American Cancer Society in support of such programs like their R.O.C.K., “Reaching Out To Cancer Kids”.

The American Cancer Society also gives a majority of its funds to research, through its international counterpart. “Hideaway Chips Away at Cancer” is a vital part of Marco Island’s share in the fight against cancer. If any reader is interested in helping fight this terrible illness, please contact the Marco Island branch of the American Cancer Society to see how you can help. Every minute and dime is essential to combat this disease that has affected so many.