Hello Holly! First Baby Dolphin of the Fall is Here! 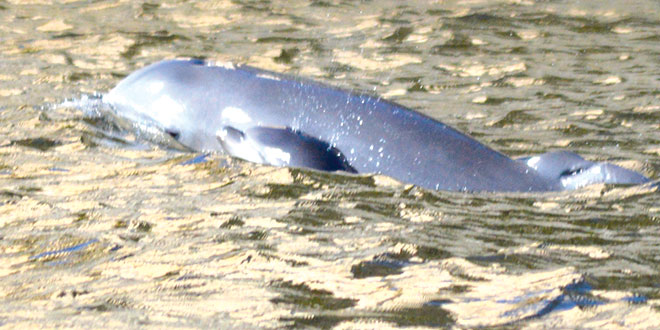 Mom Sparky and baby Holly come up for air together. Holly is just learning how to breathe properly. PHOTOS BY BOB MCCONVILLE

This is the second article in a series of three about Marco Island’s young dolphins. The first article can be viewed by going to coastalbreezenews.com under the “Environmental” heading, then under “Stepping Stones.”

It is Thursday morning, Oct. 2, and the Dolphin Explorer is on the water, as usual, surveying the area dolphins. Naturalist Kent Morse and Captain Michael Tateo, along with several guests, enjoy multiple sightings which include a few adult females. Information is being logged into the data base for research purposes. Among those seen is two-time mom Sparky, but no new calves are noticed.

The very next day Captain Michael is again at the helm; this time, with me along side as naturalist. It’s the luck of the draw. As we enter the main channel from the Gulf of Mexico toward the Isles of Capri, Michael excitedly yells, “Is that Sparky in front of us with a new calf?” Sure enough, he was correct! Just one day earlier Sparky was seen with several other dolphins. Today, she is mothering a new baby, less than 24 hours old, and the first newborn of the fall.

Respectfully, we maintained our distance from the pair and visited a very short while, giving them the privacy to begin life’s journey together. If all goes well, they will be side-by-side for at least three years, and Sparky will need all the rest and energy she can create over the next few months to raise her calf.

Michael and I both chuckled as we watched Holly (in the water) bobbling along. Just learning how to swim and breathe, it looked like a rubber toy being tossed by the nearly calm waters. Birthing season has begun.

The adult female, Sparky, is known quite well. This is the fourth calf she has produced. When the survey team first sighted her in 2006, she already had a calf along side named Orange. In 2007, Sparky gave birth to Pinta, and in 2011, her third offspring was Keegan. On October 3, Holly became the newest family addition.

On Friday morning, Sparky was seen with her new offspring, confirming the young one was less than 24 hours old and

The light creases in baby Holly’s skin, called fetal folds, tell us that this young one is very, very new. These folds will fill out in just a few weeks, as the baby grows.

was given a birth date of October 3. Did Keegan somehow know it was time to leave mom? It certainly seems to be the case!

If you look at the photos included here you can see how tiny Holly actually is. Newborns are normally in the t25-pound range. Also, you can notice the “creases” on the baby’s skin. These are called “fetal folds” and are a result of the balled positioning in the womb. These folds will decrease over time, as the young one enjoys the rich nutrients of mother’s milk.

Here’s another unique possibility for Sparky. As mentioned above, Orange was already a year or two old when first seen with mom. Orange is now of the proper physical maturity and age to be a mom as well. If she were to have a calf this year, it means that Sparky would be the first known grandmother to the survey team, and Grandmom just had a calf of her own. This is so unique!

The Dolphin Project team is noticing some other events in the Marco waters as well. One of our other adult females, Cosmo, had a calf named Hunter in 2011. The last sighting of Cosmo was by herself, and Hunter was nowhere in sight. This puts Cosmo on the short list of potential moms for this fall. There is similar behavior among other females as well.

Using Cosmo and Hunter as an example, Hunter was born in 2011. During the first two years of the newborn’s life, it is critical to stay close to mom. She will nurse the calf, protect it from predators, teach it how to fish and how to socialize. When the calf turns two, mom may become pregnant again. Since the pregnancy period is 12 months long, and Hunter is turning three, this could explain Hunter’s absence at this time. The youngster has had that final year to hone its skills and prepare for life away from mom.

As for Sparky and newborn Holly, it was good to see the first calf of this fall. This does not necessarily mean that Holly is the only one in the area. There’s a lot of territory to be covered and too many places for moms to keep the young ones protected. There could already be other babies in the area.The search will continue. Surely, other newborns will be found.

Nearly one dozen adult female dolphins are potential moms this fall. Does this mean there will be a dozen new calves this year? Probably not, but it sure will be exciting to see what happens in our area waters over the next two months! It’s just another phase of the journey, another stepping stone, bridging one dolphin generation to the next. I can’t wait to see more!

Bob is the owner of Stepping Stone Ecotours and a naturalist on board The Dolphin Explorer. He is a member of Leadership Marco 2014 and Bob loves his wife very much!