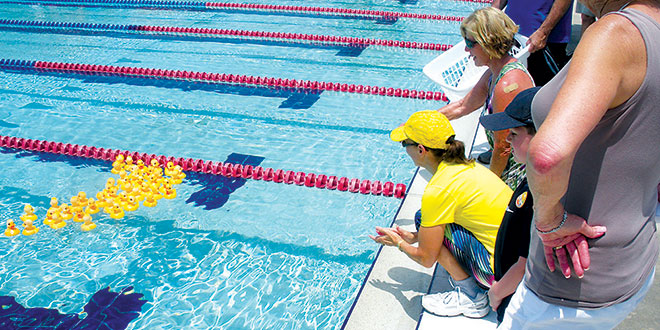 Judges and onlookers cheering on the ducks as the near the finish line.

The little yellow duckies showed no indication that onlookers’ cheers were going to affect their pace as they traveled the length of the Greater Marco Family YMCA pool. But that’s always the case with the plastic faux waterfowl that comprise the annual Dottie’s Duck Derby fundraiser, which benefits the Y’s aquatics program.

This was the 20th anniversary of the derby, which was started by the event’s namesake, Dottie “Miss Dottie” Weiner. The Y’s pool and aquatic center, where the derby is held, are also named after the woman who started its “Learn to Swim” classes in 1972 and directed the aquatics program until 2012.

Individuals and companies purchased the ducks, pre-race, and were then entered in three separate races with personnel from Marco’s Fire-Rescue department propelling the length of the pool using a portable pump and a fire hose.

Children from the Y’s aquatics program and swim team raced in between heats of the April 25 derby. This year’s “Wacky Kids Race” winner was also last year’s victor, the almost 11 year-old Karla Upham, who took home $300.

“It’s like a birthday miracle because my birthday (April 29) is really close,” she said. Regarding her plans for the money, Karla said a new Xbox was a possibility, while glancing hopefully at her mother Lina, who is the purchasing and fiscal analyst for the city’s finance department.

The winner of the celebrity duck

Despite dealing with a cold, Marco Y CEO Cindy Love was all smiles at the derby’s conclusion.

“We had beautiful weather and the ducks raced fabulously,” she said. “The funds go toward the maintenance of the pool, so we’re excited to do this in honor of Miss Dottie, who spent years building up this pool and the programs here. Unfortunately she’s moving and she couldn’t be here today, but it’s (the Duck Derby) always going to be in honor of Miss Dottie.”

The day was kicked off by the Y’s annual Healthy Kids Day, marking the first time the two events were held back to back.

Event sponsors Kriger Orthodontics and Walgreens drug store were present with healthy living information. They were joined by “McGruff the Crime Dog” and personnel from Marco’s police and fire departments, who dispensed water and bicycle helmet safety tips, and checked helmets to ensure they were safe and fit properly. A healthy

New to Healthy Kids Day this year was the Color Run, for which a makeshift mini-track was created along one side of the main Y building. The races were broken down by age group and as the youths raced, volunteers doused them with colored powders of assorted colors, to the children’s delight.

Valan Cruz, 11, won the middle school Color Run, and he came away from the event with an important piece of knowledge: “Eat healthy and to run a lot so that you can get healthier.”

His father, Alan, said it was their first time attending Healthy Kids Day.

“It was a beautiful day for it,” he said. “Everybody was real accommodating. The atmosphere in the gym was great – the drumming and the Zumba – a lot of activity. It was maybe 11 (a.m.) and I thought it was 2 o’clock already because of all the activities they had going.”

Participants in the Y’s Wonder Girls program served as the event’s hosts and also planned and helped out with the morning’s activities. 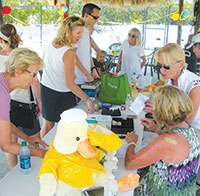 People purchasing ducks to enter in the Duck Derby.

grade girls designed to empower the young women to adopt healthy lifestyles. The program was created by Deborah Passero, the Y’s Healthy Living and membership director, and Carrie Bamberger, a science teacher at MICMS.

“They’ve been working really hard on (embracing) a healthier lifestyle – eating habits, self image, exercise,” said Chamberlain. “Wonder Girls has been a really good program for them all.”

Charlene Garcia, the Y’s school age (after-school program) coordinator, coordinated Healthy Kids Day. She was already looking forward to next year’s Healthy Kids Day – Dottie’s Duck Derby festivities. The dual events will be centered around the Y’s new $1.2 million youth development center, which is under construction near the pool and should be completed in September.

“Today, we were a little spread out because we’re under construction,” said Garcia. “That was a bit challenging, but all in all, it went well. I was pleased with the color run. I think everyone was happy with that. I think our middle school girls (the Wonder Girls) did really well. They were happy. It’s not often that you see kids that age who are happy to come out and be active. So we were really proud and pleased with that.”

For more information about how you can support the Greater Marco Family YMCA, contact the Y at 239-394-3144, ext. 204 or visit www.greatermarcoy.org.